There had been close to 1,000 calls to the Dublin Fire Brigade before midnight.

Unsurprisingly, 31 October is the busiest day of the year to be a member of the fire brigade.

RTE News reported at 11pm on Wednesday night that there had already been over 750 calls made to the Dublin Fire Brigade, most of them fire-related, and many of those in relation to bonfires. 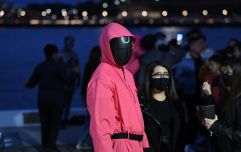 END_OF_DOCUMENT_TOKEN_TO_BE_REPLACED

Just after midnight, the Dublin Fire Brigade Twitter account called it quits for the night, but not before posting an image which updated where the fires had been located around the city, and you can clearly see on the map where the bonfire calls were coming from:

And that is a wrap on our #DFBLive Map. We'll update it in the morning with any fires that happen after midnight. The good news is that the majority of fires are now either out or died down, however if you have concerns ring us on 999 or 112

By that time, they had declared that the majority of the fires were either out completely or had died down, but the individual stories of some of the fires across the city showed that Halloween night had once again ended with some destruction of public and private property.

There was an above average of amount of call outs for car fires, and there was also a high number of calls from people who claimed that their wheelie bins had been stolen and/or set alight. Dublin Fire Brigade had recommended that the bin owners bring their bins back inside until the morning (which is something to keep in mind for Halloween 2019).

Kilbarrack firefighters at a bonfire tonight, there would a lot of radiated heat from a large bonfire like this #DFBLive #Dublin #Halloween pic.twitter.com/iy7yTZKU6S

popular
Gardaí warning people not to make unnecessary journeys in anticipation of Storm Barra
Man dies after being attacked by newly calved cow in Mayo
Carlow woman banned from keeping animals for life after starving dogs to death
The JOE Movie Quiz: Week 131
"Danger to life" risk with Storm Barra "weather bomb", warns Met Éireann
An underseen Keanu Reeves adventure is among the movies on TV tonight
QUIZ: Can you get full marks in this General Knowledge Quiz?
You may also like
1 month ago
TG4 has once again raised the bar for Halloween night broadcast pranks
1 month ago
QUIZ: Can you guess the horror movie from a single image?
1 month ago
Horror bursts through your screen in the movies on TV tonight
1 month ago
Deputy CMO says people can trick or treat safely this Halloween if they take "basic precautions"
1 month ago
9 of the best horror movies on Netflix right now
1 month ago
Expect an unseasonably warm Halloween as temperatures to reach 17 degrees next week
Next Page