€100,000 worth of cocaine and other drugs seized in Dublin

The drugs were seized during a search of a house in the Foxborough of West Dublin area on Friday night (1 November). Among the drugs was a quantity of cocaine with an estimated street value of €100,000.

A spokesperson for An Garda Síochána confirmed that smaller quantities of MDMA, cannabis herb and other substances were also found at the property. 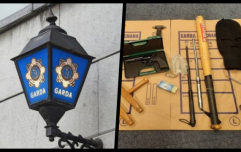 END_OF_DOCUMENT_TOKEN_TO_BE_REPLACED

The search operation was part of ongoing investigations targeting the sale and distribution of controlled drugs in the west Dublin area.

A 24-year-old man was arrested at the scene and is currently detained under Section 2 of the Criminal Justice (Drug Trafficking) Act, 1996 at Lucan Garda Station. The man can be held for up to seven days.

Gardaí have shared photos of the haul on Facebook.

popular
Amazon Prime Video has quietly added 10 big new movies to its library
One of the best Irish movies ever made has just been added to Netflix
The 50 most iconic songs of all time* have been revealed
House of Gucci has the best sex scene from a big Hollywood movie in years
Clint Eastwood's final western is among the movies on TV tonight
8 great new additions to Amazon Prime Video in December
QUIZ: Can you name all of these Succession characters?
You may also like
17 hours ago
Vodafone launches same-day repair for smartphones in Dublin, Cork, and Galway
1 day ago
Yet another new Wetherspoons is set to open in Dublin city centre
1 day ago
Planning permission denied for hotel on Dublin's Cobblestone pub site
4 days ago
Gardaí investigating man's homophobic rant and alleged attack at Dublin cafe
6 days ago
Body of man found in unexplained circumstances in Dublin
1 day ago
Landslide, earthquake, 'huge dump of snow' and female Taoiseach predicted for Ireland in next three years
Next Page