The Eighth Amendment has officially been removed from the Irish constitution

Almost four months after the Irish public voted in large numbers to repeal the Eighth Amendment, first introduced by referendum in 1983, President Michael D. Higgins has signed a bill formally repealing the eighth. 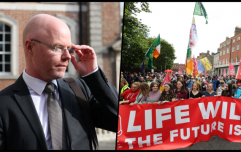 END_OF_DOCUMENT_TOKEN_TO_BE_REPLACED

The amendment, which amounted to a constitutional ban on abortion, was the subject of an enormous grassroots movement of Irish citizens who sought to repeal it. A tense referendum campaign eventually came to a head in May 2018 and almost 67% of the Irish electorate resoundingly voted for the repeal of the Eighth Amendment.

The government will now begin work on introducing legislation that will provide for abortion services to be made available in Ireland. Minister for Health Simon Harris has said that he expects such legislation will be enacted by 2019.

It is expected that legislation to facilitate abortion will be introduced during the first week in October.

popular
QUIZ: Can you name all the countries beginning with A?
Elderly Irish man stabbed to death on mobility scooter in London
Here's how to make €9-11 on Revolut in just a few minutes
New car-free town with population of 85,000 set to be built in Dublin
Galway City Council street cleaners claim Lotto jackpot worth over €5.5 million
Articulated lorry driver in his 20s dies in Tyrone
A terrific '90s crime drama is among the movies on TV tonight
You may also like
2 years ago
Martyrs - What price do women have to pay when we ask them to share their stories?
3 years ago
Very low turnout suggests nonsense politics is wearing down Ireland's will to live
3 years ago
“We can’t afford to be complacent” - Repeal activists to march until abortion legislation in place
3 years ago
Abortion Rights Campaign to host seventh annual March for Choice later this month
3 years ago
Simon Harris confirms that abortion services in Ireland will be free
3 years ago
"The result of this referendum has created a new reality" - National health institutions share concerns over abortion services
Next Page