Elderly man dies in Meath after being hit by a bus

A man in his 70s has died after he was struck by a bus in Meath.

Gardaí are appealing for witnesses after a road traffic collision on Friday (1 November) in which an elderly man was killed.

The incident occurred on the R135 at Newtown Cross, The Ward near Ashbourne, at around 11pm last night. A male pedestrian was "seriously injured" when struck by a bus.

According to a spokesperson for the Gardaí, the man was treated by emergency services personnel, but he later died at the scene of the incident.

Gardaí also confirmed that the driver of the bus was uninjured.

The deceased was then removed to the mortuary at Navan Hospital where a post-mortem examination will be carried out. A report has been sent to the local coroner. 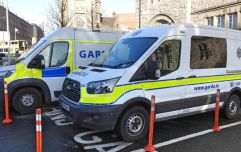 END_OF_DOCUMENT_TOKEN_TO_BE_REPLACED

Garda forensic collision investigators have examined the crash site and the road has since reopened to traffic.

Investigating Gardaí are now appealing for witnesses to contact them at Ashbourne Garda Station 01-8010600 or the Garda Confidential Line 1800 666 111.


popular
QUIZ: Can you pass the Leaving Cert?
QUIZ: Which Tiger King character are you?
The 50 most iconic songs of all time* have been revealed
Here's Week 26 of JOE's 19 in 90 quickfire quiz
QUIZ: How many of these Recess characters can you name?
Guidelines for safe shopping issued due to lack of consistent hygiene standards in Irish supermarkets
People think they've figured out the ranking of the viewers on your Instagram Stories
You may also like
1 day ago
Man in serious condition after being stabbed multiple times in Cork
1 day ago
Three arrested after shots fired at a house in Kildare
2 days ago
Woman in her 50s attacked with metal mug in aggravated burglary in Cork
2 days ago
Six-year-old boy in Mayo dies after being found in stream close to home
6 days ago
€300,000 worth of heroin seized in Dublin
6 days ago
Man detained following unexplained death of woman (70s) in Kilkenny
Next Page