Emergency services called after man gets stuck in a chimney

The man has passed away.

A man that was stuck inside a chimney in England has passed away.

The man was trapped inside Dixon's Chimney in Carlisle, Cumbria. The police were originally alerted to the situation just after 2.20am on Monday, 28 October.

A rescue operation was launched but after hours of effort, the man's body was recovered but he was confirmed as deceased.

Paramedics said that the man was in his 50s. He was pronounced dead at the scene.

Dixons chimney - Our thoughts and thoughts of all emergency services and partners are with the family. pic.twitter.com/nNC9RQtTP8

The chimney is 80 feet in the air and the man was recovered after a 90-metre cherry picker was used to assist in the recovery. 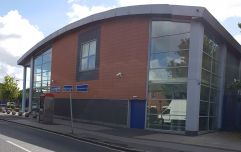 END_OF_DOCUMENT_TOKEN_TO_BE_REPLACED

Previous efforts to retrieve the man involved drones, a helicopter, and dropping a rescue team onto the chimney. However, they all proved to be futile.

An investigation has also been launched into the circumstances of how and why the man was on the chimney.


popular
The JOE Friday Pub Quiz: Week 210
Over 6,000 items seized by Gardai in five counties in operation targeting illicit television products
Employees given option to pay tax bills resulting from Covid-19 wage subsidy schemes over four years
Here's the lineup for this week's Late Late Show
QUIZ: If you can get 18/21 on this Scrubs quiz, you're a qualified doctor
Ireland’s travel Green List to be reduced to four countries after four countries removed
The Hardest Star Wars Quiz You Will Ever Take
You may also like
5 hours ago
Teenager (19) dies following road collision in Mayo
17 hours ago
€3.5 million worth of cocaine seized in Dublin
22 hours ago
Over €100,000 worth of drugs seized in Clare
1 day ago
Two police officers shot during Breonna Taylor protests in Louisville
2 days ago
Man in his 80s dies after being hit by a truck on main street in Charleville
2 days ago
Gardaí are renewing their appeal following a serious assault in Cork
Next Page