Eoghan McDermott asked RTE Director General Dee Forbes who she'd most like to kick in the testicles.

The Broadcasting Authority of Ireland has upheld a complaint regarding a question asked by Eoghan McDermott on RTÉ 2FM in March of this year.

During an interview with Dee Forbes, RTÉ's Director General, McDermott asked her who she would most like to kick in the testicles. 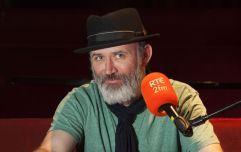 END_OF_DOCUMENT_TOKEN_TO_BE_REPLACED

The complainant found the comment offensive and discriminatory towards men and was of the view that it promoted violence against men.

The complainant also felt that the comment was insensitive and was unjustified, and that Forbes, in her role of Director General, should have corrected the comment.

The BAI found that the comment was not necessarily discriminatory towards men, and did not agree that it could be considered as supporting discrimination against any person or group in society.

However, they did find that despite the segment being a light-hearted, recurring joke, the reference to kicking a man in the testicles was not justified.

As a result, the Committee decided to uphold this element of the complaint.

This was one of two complaints to be upheld by the BAI, as five of the complaints were rejected.

The Big Reviewski || JOE · TBR Spotlight: Loki - Episode Two - 'The Variant'
popular
Garda union hits out at "absolute confusion" over outdoor drinking and dining
The Queen appealing for volunteers to weed the garden of her Sandringham Estate
Gardaí will use "discretion" over outdoor drinking at pubs and restaurants
Unvaccinated people will be able to travel abroad this summer with Covid cert, says Leo Varadkar
The Lisdoonvarna matchmaking festival has been cancelled for a second year
QUIZ: Can you name all these European countries from a list of cities?
The JOE Movie Quiz: Week 107
You may also like
6 months ago
Larry Gogan's grandchildren pay lovely tribute to him on the radio
1 year ago
Greg O'Shea announced as new co-host for 2FM's Breakfast Show
2 years ago
The return of The Ryan Line on 2FM went down a treat with listeners
2 years ago
Jenny Greene returns to 2FM as they announce major changes to their programming
2 years ago
Nicky Byrne announces that he's leaving 2FM
2 years ago
Jenny Greene announces she's leaving 2FM
Next Page