The men are believed to have links to Northern Ireland and the Republic of Ireland.

Essex police investigating the discovery of 39 dead bodies in the back of a lorry last week have confirmed that they are looking to speak to two men from Armagh.

In a statement published on Tuesday afternoon, Essex Police said: "Ronan Hughes, 40, from Armagh in Northern Ireland and his brother Christopher, who is 34, and also from Armagh, are wanted on suspicion of manslaughter and human trafficking." 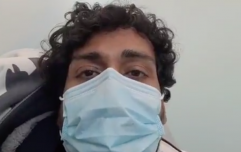 END_OF_DOCUMENT_TOKEN_TO_BE_REPLACED

Ronan is also said to go by the name 'Rowan.'

The men have connections to both Northern Ireland and the Republic of Ireland.

Detective Chief Superintendent Stuart Hooper, who is leading the investigation, said: "Finding and speaking to the Hughes brothers is crucial to our investigation.

"At this time we believe they are in Northern Ireland but they also have links to the Irish Republic.

"If you know where they are or have any information about their whereabouts I need you to call my team.

"This is a case where 39 men and women have tragically died and support from the community is going to be vital to help bring those responsible to justice."

Maurice Robinson, the 25-year-old driver of the lorry from Armagh, remains in custody — charged with 39 counts of manslaughter, conspiracy to traffic people, conspiracy to assist unlawful immigration, and money laundering.

Three other suspects have been released on bail.

popular
The JOE Friday Pub Quiz: Week 266
Here's the line-up for tonight's episode of The Graham Norton Show
HBO announces a new Sopranos series is in the works... kind of
Nightclubs are now ticket-only events, according to new measures
Alec Baldwin expresses "shock and sadness" over fatal film set shooting
‘If You Go, Go Slow’ - HSE launches new campaign urging people taking drugs to do it safely
Hunger strike ends as Nadim Hussain assured he won't be deported
You may also like
8 hours ago
419 vehicles caught over the speed limit on National Slow Down Day
10 hours ago
Young woman suffers serious eye injury after being struck with a firework in Eyre Square
13 hours ago
Human remains found positively identified as Brian Laundrie
16 hours ago
Alec Baldwin fatally shoots woman with prop gun on movie set
2 days ago
Man aged in his 80s dies following three-car collision in Kildare
3 days ago
CNN's John King reveals on-air he has multiple sclerosis
Next Page