The numbers for the €98 million Euromillions jackpot are in

There were no winners of the big prize, meaning Friday’s jackpot is going to be even bigger again.

There was no repeat of the massive win tasted by an Irish syndicate earlier this year in Tuesday night’s Euromillions draw, but with the jackpot going unclaimed, there’ll be another chance for us all to dare to dream on Friday night. 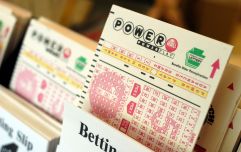 END_OF_DOCUMENT_TOKEN_TO_BE_REPLACED

The jackpot now rolls over until Friday when it will be in excess of €100 million; it would be a decent way to ring in the weekend alright.

popular
Netflix has just added 12 very big movies to their library
5 years ago, Hollywood took a massive gamble on a huge sequel... and lost big time
One of the most underrated crime thrillers of recent years is among the movies on TV tonight
Mystery over 'dead husband' spotted in Indian restaurant has been solved
QUIZ: JOE's Big News Of The Day Quiz #40
The JOE Friday Pub Quiz: Week 332
Netflix backtracks on anti-password sharing measures following user outcry
You may also like
4 days ago
Harvard professor says winning lottery won't make you happy
6 days ago
Man wins $1m on lottery ticket after someone pushed in ahead of him in queue
1 week ago
Woman who earns more than boyfriend 'gets the ick' because she has to pay for everything
1 month ago
Your friends in THESE counties are quickest to pay back money they owe, new study reveals
2 months ago
Tenant tried to sell landlord's €455k house without him finding out
2 months ago
Here's how much money each I'm A Celeb contestant will earn from the show
Next Page