Big prizes look set to be won even if the €230 million jackpot goes a-begging...

The largest-ever jackpot in a EuroMillions draw looms over us like the beaming sun itself, which has curiously gone away after a couple of days of making its presence felt.

But I digress. We're here to talk about money, not global warming. Tuesday's (12 July) EuroMillions jackpot stands at a guaranteed €230 million, which seems like more trouble than its worth but you'd hardly say no to it, now would you? 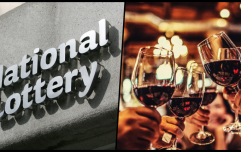 END_OF_DOCUMENT_TOKEN_TO_BE_REPLACED

One thing that does look likely, however, is an estimated "€21 million flow down" to the next prize tier which means that the Tuesday night draw could see multiple players become overnight millionaires, according to a Lotto spokesperson.

"While Tuesday’s jackpot is guaranteed to be capped at the hugely life-altering amount of €230 million, players will also have the chance to win even bigger than usual at a lower prize tier," says the spokesperson.

"As the jackpot is capped at €230 million, the additional funds that would usually be added to the jackpot will now flow down to the next prize tier at which there is a winner and in tomorrow night’s draw, we estimate this figure to be in the region of €21 million.

"This means that we could see a number of millionaires being made after Tuesday night’s draw – and that’s even if the jackpot isn’t won."

The now capped-at €230 million mega-prize must be won by the fifth draw on Friday, 22 July.

popular
One of the best movies of the decade has just been added to Netflix
Cristiano Ronaldo 'agrees £173m-a-year deal' with Saudi club
Country singer Jake Flint, 37, dies in his sleep just hours after his wedding
20 years ago, one of the best sci-fi movies of the 21st century was a box-office bomb
Katherine Ryan says famous TV star is a ‘predator’ and everyone in industry knows
U2 drummer Larry Mullen Jr. says band may perform without him in 2023
Surprise frontrunner emerges as potential next James Bond as producers 'love him'
You may also like
3 months ago
Two new millionaires in Ireland as part of Euromillions "Ireland Only Raffle"
4 months ago
County where winning Lotto jackpot ticket worth over €5.5 million was sold confirmed
6 months ago
This week's Super Enalotto draw is worth €206.5 million, here's how you can play from Ireland
9 months ago
Shop where winning Euromillions ticket was sold revealed
9 months ago
‘You’ve won big!’ - Irish family reveal the moment they knew they’d won €19 million Lotto jackpot
10 months ago
Shop where winning Lotto jackpot ticket was sold revealed
Next Page