The B.1.617 variant of Covid-19, which originated in India, has been a topic of much conversation in recent days.

The new strain has been a cause of concern, even with an increase in vaccinations over recent weeks. Here is everything you need to know about the new variant.

END_OF_DOCUMENT_TOKEN_TO_BE_REPLACED

Is the virus in Ireland yet?

Three cases of the B.1.617 variant have been reported in Ireland so far.

Two of the three cases have been associated with travel.

Is it more transmissible?

Speaking on RTÉ's Today show with Claire Byrne, Dr Cillian de Gascun said it is too early to say if the variant is responsible for the rise of cases in India or if the country is just experiencing a new wave of the virus.

He said he would be more concerned about the variant first detected in South Africa as there are currently more cases of the strain present in Ireland. However, he said, the numbers are still really small, with only around 1,000 sequences a week being carried out thus far.

Where did it originate?

END_OF_DOCUMENT_TOKEN_TO_BE_REPLACED

Researchers first discovered the new variant with two new mutations which may be better at evading the immune system in India.

In 15-20% of samples from the Indian state of Maharashtra (the state accounting for 62% of cases in the country), a new, double mutation in key areas of the virus had been detected.

In what ways does it differ from other strains?

The double mutation is concerning because it is located in the spike protein of the virus, which is the part it uses to penetrate human cells.

Spike proteins attach via receptor binding domains, meaning the virus can attach to receptors in our cells. However, the newer mutations include changes to the spike protein that make it fit better to human cells. 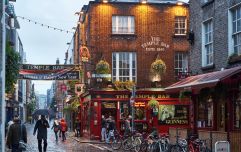 END_OF_DOCUMENT_TOKEN_TO_BE_REPLACED

This is a problem because it means the virus can gain entry into the cells easier and multiply faster.

Does the Covid-19 vaccine protect against the strain?

Speaking on RTÉ's Today show with Claire Byrne, Dr De Gascun said there is currently no evidence to suggest that the B.1.617 variant will have an impact on vaccine effectiveness.

He added that the situation is being monitored due to the mutations in the spike protein.

popular
Meteor shower to be visible tonight as Halley's Comet passes over Ireland
The 50 most iconic songs of all time* have been revealed
Benedetta is undoubtedly going to be the most controversial movie of 2021
PICS: The man with the biggest penis in the world has one unbelievable problem with it
Joe Duffy listener complains of being quoted €4,100 for three-night hotel stay in Kerry this summer
Woman expecting to give birth to seven babies ends up having nine
QUIZ: Can you guess these European countries from their outlines?
You may also like
10 hours ago
“Normal” life will resume in August, says Leo Varadkar
11 hours ago
Stephen Donnelly says its "not okay" alcohol is being sold at "pocket money prices"
13 hours ago
Meteor shower to be visible tonight as Halley's Comet passes over Ireland
14 hours ago
Stephen Donnelly suggests that Ireland "wouldn't need" 24-hour vaccination centres
16 hours ago
Limerick IT and Athlone IT merge to form new technological university
18 hours ago
Cyclist killed after collision with a bus in Dublin
Next Page