Far-right demonstrators clash with police in London over Churchill statue

Violence has erupted in central London.

Social media is plastered with footage of fighting in the streets of London as far-right activists, who purportedly set out to protect the Winston Churchill statue in Parliament Square, clashed with police, whose job it is to protect that same statue.

Ostensibly, the demonstration had begun as a counter-protest to a Black Lives Matter protest that had been scheduled to take place at the statue of the wartime Prime Minister. 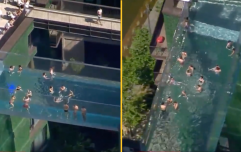 END_OF_DOCUMENT_TOKEN_TO_BE_REPLACED

Following several incidents wherein statues of historic figures who committed racist atrocities had been torn down - such as the statue of Edward Colston in Bristol - the Winston Churchill statue had been boarded up in an attempt to avoid its desecration.

However, as the Black Lives Matter protest was officially called off (for fear of such violence), far-right activists began to clash with police. Police had cordoned off the protest area in an attempt to stop the marchers from reaching Trafalgar Square.

Churchill, while thought of by many as a hero for his role as Prime Minister during World War 2, is also remembered across the globe for his roles in such atrocities as the Bengal famine, introducing the Black and Tans to Ireland, and legacy of racist attitudes and remarks.

Bas Javid, Commander for Frontline Policing, said that "a small minority were intent on bringing weapons into London."

We want to thank all of those who are talking to our officers and responding when we have been asking them to do something in order for us to keep London safe. We are grateful. 2/2

The Big Reviewski || JOE · The Big Reviewski with Dune, a mini-Hangover reunion & the best of Timothée Chalamet
popular
WhatsApp to stop working on 53 phone models, including iPhone 6
Clashes between protestors and private security as tenants removed from Dublin property
Updated Status Orange warning issued for three counties as heavy rain to continue
Alec Baldwin could face criminal charges over fatal film set shooting
Irish hotel named as the scariest place to stay in Europe
Vaccine passes could be needed for hospital visits, Leo Varadkar suggests
QUIZ: Can you identify which of these countries have the colour red in their flag?
You may also like
9 months ago
Major incident declared in London as Covid cases overwhelm hospitals
1 year ago
Police officer shot dead in south London
1 year ago
Man shot dead following terrorist-related incident in London
1 year ago
Man shot dead by police following number of stabbings in London
1 year ago
London Bridge closed off following reports of gunfire
2 years ago
Irish musicians Hare Squead say Rory Stewart's "minor gangsters" remarks "come from a racist place"
Next Page