Fianna Fáil joined Instagram today, but made a balls-up of the announcement

What's in a name?

Fianna Fáil supporters are probably still buoyant after their political resurgence in the recent General Election, but some people might argue that the traditional boundaries and differences between Ireland's main political parties are becoming harder to distinguish.

While this might be true, Fianna Fáil's name will always carry political and social significance in the 32 counties because it's an important part of Irish history. 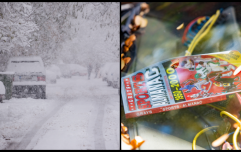 END_OF_DOCUMENT_TOKEN_TO_BE_REPLACED

It seems that the people running the social media account for the 'Soldiers of Destiny' or 'Warriors of Fál' had a fairly noticeable fail this morning though when they announced that the party had joined Instagram.

The original tweet has since been deleted, but here's a screengrab of the original announcement.

Proof that there's a 'fine' line between success and Fianna Fáil-ure when it comes to social media. Then again, maybe it's proof that a Fine Gael and Fianna Fáil merger is on the way! 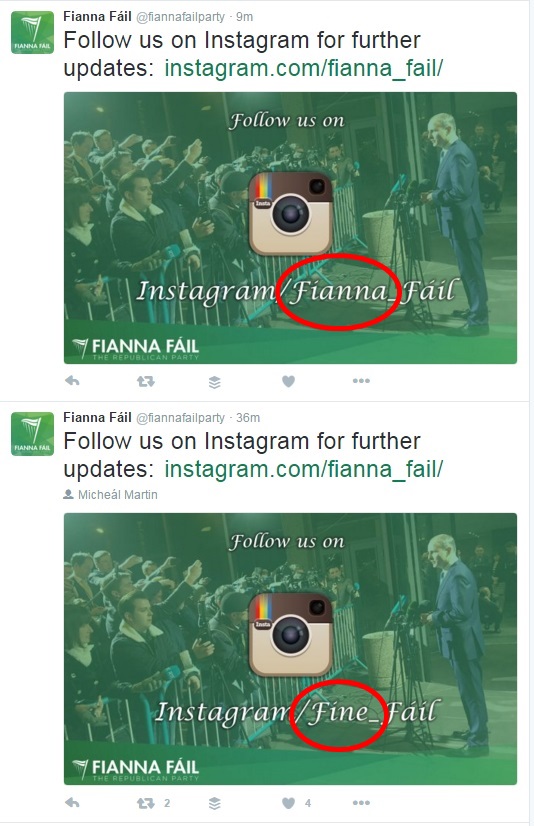 popular
One of Keanu Reeves' best movies has just been added to Netflix
QUIZ: Can you get full marks in this General Knowledge Quiz?
The 50 most iconic songs of all time* have been revealed
Just in time for Christmas, all eight Harry Potter movies are now available to stream at home
QUIZ: Can you get 20/20 in this desperately tricky capital cities quiz?
QUIZ: Can you get 12/12 in this snappy General Knowledge quiz?
CONFIRMED: Nightclubs to close, 50% capacity at indoor events and household mixing limit among new restrictions
You may also like
2 weeks ago
TD Paul Murphy accuses Goverment of "sleep-walking" country into a Christmas lockdown
3 weeks ago
Taoiseach says he does not anticipate lockdowns over Christmas this year
1 month ago
"I won't be reading it." Donnelly responds to claims Taoiseach lost faith in him in new book
1 month ago
WATCH: David Attenborough delivers emotional speech on climate emergency
1 month ago
'We have to be careful' – Ministers address possibility of further restrictions
1 month ago
Simon Harris "surprised" by lack of booster programme for healthcare workers
Next Page