The variant is said to contain a "large number of mutations".

The first case of the new Covid-19 variant in Europe has been detected in Belgium.

On Friday (26 November), leading Belgian virologist Marc Van Ranst tweeted that one sample was confirmed as the B.1.1.529 variant.

The case was confirmed in a person who had returned from Egypt earlier in the month, the virologist said.

In a video posted to Twitter, Infectious Disease Epidemiologist for the World Health Organisation (WHO) Dr Maria Van Kerkhove said that the variant was first detected in South Africa.

While little is known about the variant yet, she said it does contain a "large number of mutations".

"The concern is that when you have so many mutations, it can have an impact on how the virus behaves," she explained.

"Right now, researchers are getting together to understand where these mutations are and what that potentially may mean for our diagnostics, our therapeutics and our vaccines."

She said it will take "a few weeks" to understand the impact of the variant with experts to discuss if it will become a variant of interest or of concern.

The European Commission has said that member states should suspend all air travel with countries linked to the new variant.

"The European Commission has today proposed to member states to activate the emergency brake on travel from countries in southern Africa and other countries affected to limit the spread of the new variant," its president Ursula Von Der Leyen stated. 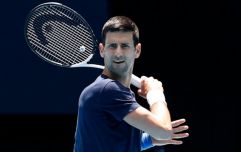 END_OF_DOCUMENT_TOKEN_TO_BE_REPLACED

"All air travel to these countries should be suspended.

"They should be suspended until we have a clear understanding about the danger posed by this new variant."

Meanwhile, Health Minister Stephen Donnelly has said he is "deeply concerned" about the new variant in a statement released by the Department of Health.

popular
Amazon Prime Video has quietly added 18 big releases to its library
Here's where all the 149 tickets that won €36,687 in Saturday's Lotto were sold
That Nic Cage film everyone is talking about is finally available to watch at home
Gardaí appeal for information on man in black tracksuit as part of Ashling Murphy murder investigation
Nightmare Alley review: Exactly the kind of adult-aimed movie people claim Hollywood doesn't make anymore
The JOE Movie Quiz: Week 137
Ashling Murphy vigil organiser speaks out following cyberflashing incident
You may also like
5 days ago
Prince Andrew fails to get Virginia Giuffre sex assault lawsuit dismissed
5 days ago
Boris Johnson finally admits he attended No 10 garden party
5 days ago
Investigation launched into "illegally" leaked footage of Australian TV presenters slamming Novak Djokovic
6 days ago
Over half of Europe’s population predicted to catch Omicron in next six to eight weeks
6 days ago
Man receives genetically-modified pig heart in "first-of-its-kind" transplant
1 week ago
Violence erupts between police and Novak Djokovic fans in Australia
Next Page