Five things you might not know about Kieran Behan

Kieran Behan yesterday became only the second Irish gymnast to qualify for the Olympics. Here are five things you might not know about a truly remarkable athlete.

1. He was born across the pond

Anyone that listened to Behan’s interview on Newstalk’s Off the Ball last night would have detected a somewhat squeaky Cockney accent as opposed to an Irish brogue, and that’s because Behan was born in London, where he continues to reside today.

END_OF_DOCUMENT_TOKEN_TO_BE_REPLACED

His parents are 100 per cent Irish, however. His Dad is from the heart of Dublin City, having been raised close to O’Connell Street, while his mother hails from County Monaghan, neither a gymnastics stronghold.

2. To put it mildly, he’s endured some hardship to get to where he is today

Where do you start? At the age of ten, a benign tumour was discovered in Behan’s thigh but doctors botched the operation to remove it. All the nerves in his leg were severely damaged and Behan was told he’d never walk again, let alone continue to practice gymnastics.

Undeterred, Behan eventually made it out of the wheelchair and began to take up gymnastics once again, until a terrible accident he sustained at the age of 12 left him unable to even consider physical activity for three whole years.

END_OF_DOCUMENT_TOKEN_TO_BE_REPLACED

Having slipped off a bar and banged his head, Behan suffered brain damage and an injury to his inner ear that affected his brain function and co-ordination skills. He had to undergo the painstaking process of learning to do simple things such as move his head in the right direction and sit up in bed once again.

Confined to a wheelchair for a lengthy period, Behan’s gymnastic dreams looked dead and buried, but this man doesn’t know when he’s beaten.

3. That wasn’t the last of his troubles

If anyone deserved a break, it was Behan, but amazingly there was more misfortune to come his way prior to his first competitive appearance for Ireland in 2010.

END_OF_DOCUMENT_TOKEN_TO_BE_REPLACED 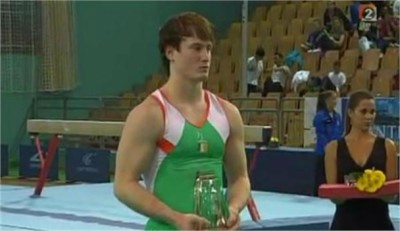 4. He got back on the horse last year

2011 proved to be quite the year for Behan, who won three World Cup medals during the Challenge World Cup Series last year, an unprecedented achievement for an Irish gymnast. He won bronze on the floor in Slovenia in September, won silver, again on the floor in Croatia in October and then in November, he topped the lot and won gold on - you guessed it – the floor, in the Czech Republic, after which he was named as the Over-All Floor Champion throughout the series.

Although he competes in other events, it will hardly come as a surprise that he describes himself as a “floor specialist”, something we haven’t seen in Ireland since the late Joe Dolan was in his heyday.

5. He’s only the second Irish gymnast to compete at the Olympics

Having finished 34th in the London Prepares Test Event on Tuesday night (see his performance below), Kieran secured his place at the Olympics in the summer. Considering that he’s only 22 and the obstacles he’s had to overcome in his whirlwind life to date, that’s some comeback.

When he takes to the floor in the English capital in a few months time, he will be only the second Irish athlete to compete in the Olympics in a gymnastics discipline, following in the footsteps of Barry McDonald, who qualified for the Atlanta games via a wildcard in 1996.

He’ll be up against some serious competition in his quest for a medal, but given what he’s done in his life to date, we wouldn’t put it past him to reach the podium.

popular
Nearly 100 flights delayed at Dublin Airport on Monday
QUIZ: Can you get top marks in this short but tricky Irish geography quiz?
Family of Ashling Murphy share heartbreaking tribute at Fleadh Cheoil
RTÉ tries to solve Michael Collins murder in new documentary
4-year-old girl killed in Sligo caravan park named as Alice Dunleavy
QUIZ: Can you score 12/15 in this difficult General Knowledge Quiz?
The 50 most iconic songs of all time* have been revealed
You may also like
3 days ago
Too little too late for sorry Alex Jones as he's hit with $4 million bill over Sandy Hook conspiracy claims
4 days ago
Two dead after getting into difficulty while swimming in Kerry
4 days ago
10 injured following collision between bus and lorry in Offaly
4 days ago
Man arrested in Dublin over suspected people smuggling operation
4 days ago
Gardaí warn public of "Hi Mum" text scam
4 days ago
Restraining orders against stalkers now easier to obtain with new bill
Next Page