A dog rescue service in Meath has discovered a pug that was left inside a plastic bag in Navan.

The five-week-old dog was hours away from death when a member of the public heard it whining on Flower Hill in Navan. After going to investigate, they found the puppy was left inside a plastic bag.

A post on the official Dog Rescue Coolronan Facebook page states that the two people who run the service, Chris Kelly and Ramona Cunningham, were on their way back from Mullingar when they got a call about the puppy.

"Apart from being left to die in a plastic bag, he's skin and bone and full of worms. He's way too young to be away from his mum. He has an issue with one of his back legs which will be checked out by our vets," they said.

Thankfully, a later update stated that the dog's leg is not broken. However, he has rickets due to a lack of calcium.

The posts also states that this puppy "is so emaciated" and that "his back legs are weak due to having no muscle mass at all."

After feeding the dog, he's beginning to walk better. The dog has also been wormed and is resting well. 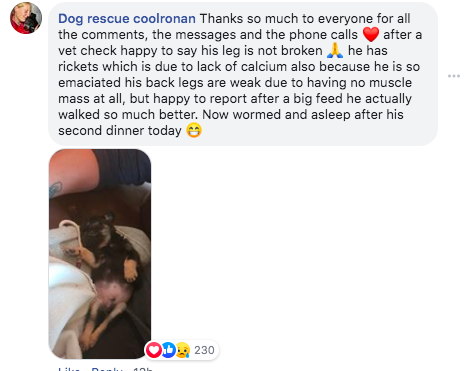 In light of this incident, Dog Rescue Coolronan are calling for harsher penalties for animal cruelty.

They're also calling on anyone who might have seen something to contact them in the strictest confidence.


popular
How the Covid-19 emergency will change the way we shop for groceries
The bizarre Tiger King story on Netflix barely scratches the surface
Man in serious condition after being stabbed multiple times in Cork
Virginia governor issues stay-at-home order until 10 June
Irish ambassador urges people on J1 visas in the US to return home
Workers affected by Covid-19 emergency urged to check if they are owed tax refunds
Here are the 8 best movies on TV this Tuesday
You may also like
2 hours ago
Three arrested after shots fired at a house in Kildare
1 day ago
Woman in her 50s attacked with metal mug in aggravated burglary in Cork
1 day ago
Six-year-old boy in Mayo dies after being found in stream close to home
4 days ago
€300,000 worth of heroin seized in Dublin
5 days ago
Man detained following unexplained death of woman (70s) in Kilkenny
1 week ago
8-year-old boy attacked by dogs in Dublin has died
Next Page