Former Real Madrid and Manchester City forward Robinho has been sentenced to nine years in prison for sexual assault.

The Brazilian has been found guilty of a 2013 gang-rape of a 22-year-old Albanian woman in a Milan nightclub, according to Sky Italia.

Robinho was playing for AC Milan at the time of the incident, which involved five other men who were also found guilty on Thursday afternoon by a tribunal in Milan. 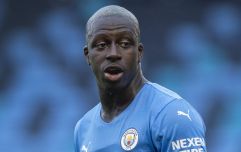 END_OF_DOCUMENT_TOKEN_TO_BE_REPLACED

A report in Football Italia highlights the fact that the 33-year-old, who is currently at Brazilian side Atletico Mineiro, will be given the opportunity to avail of "several levels of appeal" in the Italian justice system before the sentence is enforced.

popular
Met Éireann issues Status Yellow rain warnings for five counties
Met Éireann issues weather warning for three counties
Paul Reid announces decision to step down as HSE boss with a "heavy heart"
Rental availability at "extraordinarily low level" as house prices continue to rise
QUIZ: Can you conquer this delightfully difficult General Knowledge Quiz?
Aer Lingus apologises for multiple cancelled flights to and from Dublin Airport
QUIZ: Can you identify these Irish towns on a map?
You may also like
1 year ago
Everton v Man City tonight postponed due to coronavirus outbreak
2 years ago
Here's how to get tickets to Coca-Cola's last Premier League roadshow
2 years ago
They're making a cartoon show about Manchester City for some reason
3 years ago
QUIZ: How well can you remember the 2018/19 Premier League season?
3 years ago
QUIZ: How good is your memory of the Manchester derby?
3 years ago
The Football Spin on Maurizio Sarri's problems and have Chelsea handed Manchester City the title?
Next Page