Met Éireann issued a fresh status orange weather warning at 6am on Wednesday morning (28 November), alerting mariners to the threat of strong gale force winds off the Irish coast.

The warning also notes the possibility of "Storm Force 10" winds. According to Met Éireann: "South to southeast winds veering southwesterly will reach gale force 8 or strong gale 9 today on all Irish coastal waters and on the Irish Sea, possibly reaching storm force 10 for a time between Carnsore Point and Slyne Head and in the Irish Sea." 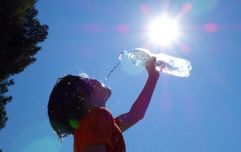 END_OF_DOCUMENT_TOKEN_TO_BE_REPLACED

This latest warning follows several other status yellow and status orange wind and rainfall warnings across Ireland as the country braces itself for the impact of Storm Diana.

These orange level winds will mostly occur in coastal regions of these counties and on high ground, and there is also the added risk of coastal flooding due to very high seas.

According to Met Éireann's Meteorologist Commentary on the storm: "The strongest winds on Wednesday will be coming from a slightly different direction (south to southwesterly) than the strongest winds on Tuesday (southeasterly), which will produce some differences in how they are experienced in different parts of the country i.e. weaker or stronger depending on exposure."

The nationwide warning will remain in place until at least 6pm on Wednesday evening.

The Big Reviewski || JOE · TBR Spotlight: Loki Episode One - 'Glorious Purpose'
popular
The JOE Friday Pub Quiz: Week 247
Matt LeBlanc has seen the memes of him as every Irish auld lad and very much enjoyed them
5 new Netflix additions to get you through the weekend
The JOE Music Quiz: Week 61
QUIZ: Full marks are far from certain in this general knowledge quiz
€6.4 million Lotto jackpot winner has yet to come forward
A Dublin Cafe will pay you €50 if you can finish this MONSTER breakfast roll
You may also like
4 days ago
Met Éireann confirms "tropical airmass" to hit Ireland this week with highs of 23 degrees
5 days ago
Met Éireann predicts plenty of sunshine and temperatures of 23 degrees all week long
1 week ago
Plenty of sunshine and temperatures of 25 degrees set to hit Ireland next week
1 week ago
Met Éireann warns of thunder and rain as temperatures to soar to 21 degrees
1 week ago
Sunday was the hottest day of the year and there looks to be more warm weather on the way
1 week ago
Met Éireann confirms highs of 22 degrees as sunshine to stick around this week
Next Page