We love Galway, as this video proves, but it's not without its drawbacks.

It turns out that the Tribal County is the worst city in the world for people who cycle to work, on account of the constant lashings of rain that come in from the Atlantic coast.

Shane Lynn has been doing a bit of research on the cities across the world that get their cyclists wet the most, and Galway has the most rain-soaked commuters on the planet. 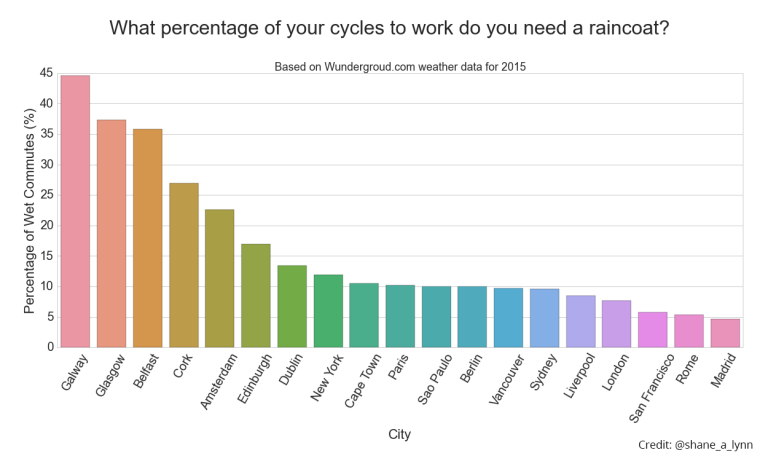 Dublin fares a lot better, with one third of Galway's soaked commuters, and is the driest city in Ireland.

While Dublin's cyclists enjoyed a lot of dry weather, the rest of Ireland's cities did not fare quite so well.

What do we ultimately take from all of this? It could be time to move to Madrid; the Spanish capital has great food, excellent football and the least rainfall of 19 major cities surveyed.

popular
Met Éireann issues Status Yellow rain warnings for five counties
Calls for €20 social welfare increase and minimum wage of €13 in new Budget
16 brand new apprenticeship programmes launched to meet target of 10,000 apprenticeships by 2025
Wheelchair user dies after falling into the water at Dún Laoghaire pier
Amazon Prime Video has just quietly added 15 big movies to its library
WATCH: Colin Farrell could be up for an Oscar in true-life thriller Thirteen Lives
Woman receives death threats after posing naked inside dead horse
You may also like
6 days ago
Tomorrow is set to be the hottest day of the year but it’s not going to last
1 week ago
24 degrees on the horizon in Ireland as UK puts fire warning in place
2 weeks ago
Temperatures to hit up to 26 degrees in Ireland as UK braces itself for hottest weather in 40 years
3 weeks ago
The remnants of Tropical Storm Alex could be headed Ireland's way this week
4 weeks ago
Met Éireann forecasts temperatures in excess of 20 degrees for the Bank Holiday weekend
1 month ago
Met Éireann issue warning for potato blight this week
Next Page