A search of the suspects’ vehicle recovered an amount of cash as well as an imitation firearm and a hammer.

Gardaí have arrested two men aged in their 20s following the aggravated robbery of a shop on Main Street in Rathcoole in Dublin which occurred at approximately 9.30pm on Saturday.

The two armed men entered the premises and made threats to staff before taking an amount of cash. 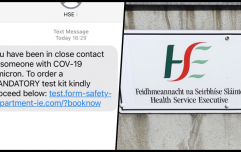 END_OF_DOCUMENT_TOKEN_TO_BE_REPLACED

The men fled the scene on foot and were later spotted entering a vehicle. The vehicle was observed traveling outbound on the M9 in the Kildare area.

The vehicle came to a stop when it came off the road and collided with a ditch, with both occupants fleeing the scene on foot.

With the assistance of the Garda Air Support Unit and Garda Dog Unit, both suspects were located and arrested following the incident.

A search of the suspects’ vehicle recovered an amount of cash as well as an imitation firearm, a hammer, and a number of other items.

Both men were taken to Clondalkin Garda Station and detained under Section four of the Criminal Justice Act of 1984.

They have since been released and a file will now be prepared for the Director of Public Prosecutions (DPP).