Operation Fanacht is now in place.

An Garda Síochana has announced that it has set up checkpoints across the country in an attempt to curb Easter Weekend travel.

Operation Fanacht will be in place from noon on Wednesday (8 April) until Monday night (13 April), and will see 2,500 Gardaí working at checkpoints at any time.

END_OF_DOCUMENT_TOKEN_TO_BE_REPLACED

In a press conference on Wednesday morning, Commissioner Drew Harris announced that permanent checkpoints were being erected on major roads across the country, saying: "We are sending a clear message, if you're travelling outside the two kilometre limit unnecessarily, you will be turned back."

Gardaí said that Operation Fanacht is focused on ensuring compliance with travel restrictions with the aim of saving lives.

Drew Harris also addressed reports of people travelling to holiday homes for Easter weekend, suggesting that if that has happened, that those who have done so will be obliged to treat their holiday home as their residence for the weekend:

"If you're at your holiday home already, that's your place of residence now and that's where you should be," he said.

Deputy Commissioner of Policing and Security, John Twomey said: "This significant policing operation is designed to support travel restrictions put in place to help flatten the curve and save lives.

"There has been very good compliance with the travel restrictions and we want to thank the public for this. However, it is vital that this continues over the coming days and over the weekend. This will save lives.

"In particular, we would ask people who are thinking of travelling to parks, natural beauty spots or holiday homes outside of the two kilometre limit not to do so. We are sending them a clear message that if they are stopped at a checkpoint they will be turned back." 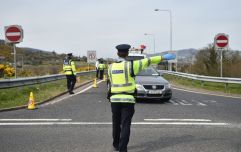 END_OF_DOCUMENT_TOKEN_TO_BE_REPLACED

John Caulfield, Interim CEO of the Road Safety Authority (RSA), also stressed the importance of safe driving in these conditions.

"While the roads will have less traffic than normal over the Easter Bank Holiday Weekend it doesn’t mean that there is no danger on the roads. People will be out exercising by going for a walk or cycle," Caulfield said.

"So, I’m asking drivers to watch out for vulnerable road users and to slow down. Never has it been more important to practice good road safety habits because every crash and injury we prevent means we are putting less pressure on our first responders and health professions at a time of national crisis."

Gardaí will now be able to arrest and detain those found to be in breach of the regulations - such as travelling for non-essential purposes, or exercising outside of a two kilometre radius from one's home.

The announcement of the Garda operation comes after Minister Simon Harris urged people to stay at home this weekend.

The Big Reviewski || JOE · Wonder Woman 1984 star Kristen Wiig & director Patty Jenkins on comedy, Cats & handsome Irishmen
popular
QUIZ: Can you correctly identify these European country flags?
QUIZ: Can you guess the drink from its can?
Recall of Pedigree dog food over safety concerns
QUIZ: Can you pass your driving test and guess the meaning of all these road signs?
The JOE Friday Pub Quiz: Week 226
The 50 most iconic songs of all time* have been revealed
The JOE Movie Quiz: Week 84
You may also like
3 days ago
Garda attacked and injured by dog while making an arrest in Dublin
4 days ago
Male and female teenager arrested after using imitation firearm and hammer in robbery at Dublin service station
1 week ago
Man killed following road crash in Kerry
1 week ago
Man arrested in Dublin after threatening woman with knife and driving off in her car
2 weeks ago
Man dies after being shot by Gardaí following standoff in Dublin
3 weeks ago
Man arrested in connection with 2003 murder in Limerick
Next Page