After he was refused entry, Gerry Adams posts a picture of his invitation to the White House

The Sinn Féin leader has responded to claims that he was refused entry to the White House.

Gerry Adams has posted a picture of the invitation he received to attend a St. Patrick's Day event at the White House on Tuesday, following the organisers' refusal to let him in on the day itself.

Adams was denied entry and forced to hang around for 90 minutes, before eventually giving up when it became clear that there would be no immediate resolution.

He said: “I had received my usual invitation to attend the St. Patrick’s Day celebrations in the White House and was pleased to accept.

“When I arrived the staff at the White House informed me that there was an issue of ‘security’. After two decades of travelling back and forth to the USA and countless meetings in the White House with successive US Presidents, this is an unacceptable development.

“It is obvious that there remain some within the US administration who seek to treat Sinn Fein differently.

“Some of our political representatives have been denied access to the USA while others, including myself, have to regularly go through additional searches and scrutiny when we travel to and from the USA.

“Last year the State Department initially refused to meet me as part of a transparent effort to pressurise Sinn Féin during negotiations at Stormont. 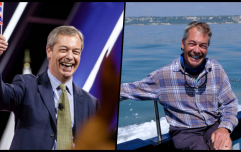 Nigel Farage has been saying republican phrases again, but in reality, he's the one laughing

END_OF_DOCUMENT_TOKEN_TO_BE_REPLACED

“That meeting did take place after protests from US political leaders. Efforts to pressurise us in the negotiations failed.

“This morning Martin McGuinness, Mary Lou McDonald and I met with the Congressional Friends of Ireland. They too shared our grave disappointment at the White House situation and expressed their determination to have this issue resolved.

“Sinn Féin will not sit at the back of the bus for anyone. We are elected to represent citizens and we will do this. I am hopeful that the controversy around my White House invitation will help lead to a resolution of all these matters.”

The Big Reviewski || JOE · The Big Reviewski with Dune, a mini-Hangover reunion & the best of Timothée Chalamet
popular
One of the best thrillers of the decade is among the movies on TV tonight
The full list of all the new shows and movies coming to Netflix in November
A villainous Tom Cruise performance is among the movies on TV tonight
"Like a whip" – director describes fatal shooting on Alec Baldwin film set
QUIZ: Get the ball rolling with this General Knowledge Quiz
The JOE Movie Quiz: Week 125
The JOE Friday Pub Quiz: Week 266
You may also like
1 week ago
Fatal stabbing of David Amess declared a terrorist incident by police
1 week ago
Dominic Cummings claims UK government always intended to "ditch" Northern Ireland protocol
2 weeks ago
Sarah McInerney grills Eoin O'Broin during heated Prime Time debate
3 weeks ago
Sláintecare to be restructured with Taskforce to tackle waiting lists, Donnelly confirms
3 weeks ago
Mary Lou McDonald hits out at Micheál Martin for "mansplaining" during heated debate
1 month ago
Leo Varadkar told he sees "homes as an investment" during heated debate in Dáil
Next Page