Health Minister James Reilly gets stuck in a lift

At the launch of a new mental health facility today in Dublin, Minister James Reilly ended up stuck in a lift for 20 minutes.

We don’t know if Minister for Health James Reilly is claustrophobic but he was certainly tested on that score today.

The Fine Gael man was attending the official opening of the Phoenix Care Centre in Grangegorman in Dublin when the lift he was in got stuck.

As you can see, thanks to this tweet by journalist Sara Burke (@sburx), his predicament drew quite a crowd. 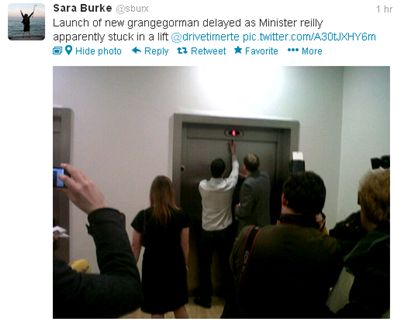 Various reports suggests that Reilly was trapped for between 10 and 20 minutes before emerging to officially launch the facility.

Rumours of sabotage from disgruntled public service workers are only the tip of the Twitter joke iceberg on this one.

popular
Leo DiCaprio's only Oscar-winning performance is among the movies on TV tonight
Irish employment law experts warn employers must find ways for staff to take entitled leave
First photos emerge of Boris Johnson drinking at Downing Street party during lockdown
RTÉ's new show is looking for the best takeaway in all of Ireland
EXCLUSIVE: Ewan McGregor and Hayden Christensen on reuniting on the set of Obi-Wan Kenobi
Ryanair steward arrested after being caught on camera drinking during flight
You may also like
7 years ago
Pic: Brian O'Driscoll's first piece of advice for his new son Billy is spot on
7 years ago
Pic: Nicklas Bendtner puts Gary Lineker back in his box with great response to Twitter slagging
7 years ago
Vine: Cian Healy recalls the time he bulldozed Richie McCaw in a very appropriate response to a Conor McGregor tweet
7 years ago
We shouldn’t be getting a kick out of Michael Owen’s miserable travel experiences this morning, but we are
7 years ago
Pic: Eoin Liston’s picture of the 1981 Kerry team on holiday is something else
7 years ago
40 years on from 'Rumble in the Jungle' George Foreman has this brilliant message for Muhammad Ali
Next Page