Here's how much more likely Tinder users are to have an STI, according to new study

Tinder and other apps have taken the dating world by storm, allowing people to connect with no more than the swipe of a finger.

Unfortunately, it seems that when our screening process for who we date becomes a little more lax, we also get a little bit less careful when it comes to practicing safe sex. 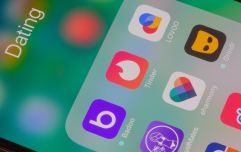 END_OF_DOCUMENT_TOKEN_TO_BE_REPLACED

A study conducted by MedExpress.co.uk, which surveyed 2,899 young people over the age of 18, found that among the 1,440 respondents who used Tinder, rates of STIs were much higher.

76% of the group of Tinder users reported having contracted an STI compared to 38% of young people who didn't user Tinder. This means those youths who were on Tinder were twice as likely to have picked up a sexually transmitted disease.

So have fun by all means, but if you're hooking up with anyone - remember that it's all-important to take precautions.

popular
Simon Cowell concerns fans with appearance as they 'don't recognise him'
The JOE Friday Pub Quiz: Week 323
Miss Croatia wears revealing outfit at World Cup game despite Qatar's dress code
Netflix has just added 30 big movies to its library
Orange is the New Black actor Brad William Henke dead aged 56
Bad Sisters stars snap back at New York Times article that called them British actors
Temperatures set to drop to freezing this weekend as Christmas predictions emerge
You may also like
3 months ago
Irish woman who flew 7,000 miles for a Tinder date now has a baby with match
9 months ago
Tinder Swindler now has a legit job making $30K in three days
10 months ago
WATCH: Netflix's new documentary dives into the dark side of Tinder
1 year ago
Belfast man ranked as one of Tinder's seven most successful UK singles
2 years ago
Ranking the 10 most passive-aggressive ways to end a text conversation
3 years ago
Four Irish entries in Cosmopolitan's top 30 most swiped Tinder accounts in Ireland and the UK
Next Page