Yesterday we brought you pictures of UFC legend Chuck ‘The Iceman’ Liddell exploring Dublin and meeting his icon Tommy Fleming.

Today we bring you a picture that will win the heart of many Irish soccer fans, Chuck Liddell and his family sporting Irish soccer jerseys.

Rumour is, Chuck is a nifty footballer and apparently he has a passion for acting as an enforcer while on the soccer pitch. Since Roy Keane left the national set up we have been struggling to find a replacement, could Chuck be the answer? 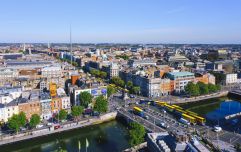 END_OF_DOCUMENT_TOKEN_TO_BE_REPLACED

Whether or not he is of international standard is debatable, but all JOE knows is that we wouldn't like to play against him in a game of five-aside astro.

Make sure to check out the UFC Fight Night Dublin at 8pm this Saturday, July 18, on 3e and keep an eye out on the night as JOE.ie is proud to be an official sponsor of Conor McGregor. We managed to secure a prominent position on his shorts. You'll never guess where...