Rents for properties close to DART stations and Luas stops rose by 3% to an average of €1,770 per month in the first three months of 2018, according to a new report from Daft.ie.

This means that those living close to Dublin’s rail networks are now paying a premium of €3,360 per year, or 17% more, in comparison to the average rent for Dublin. 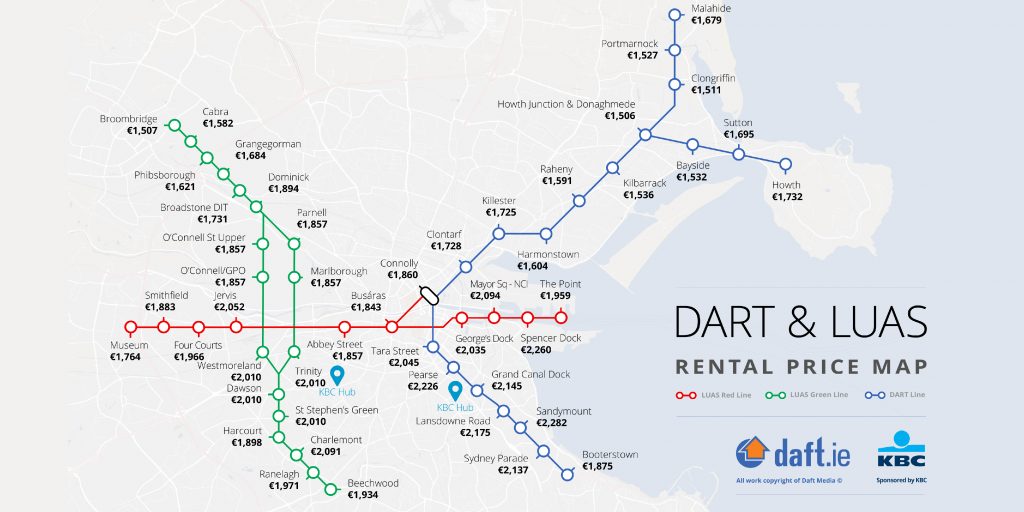 END_OF_DOCUMENT_TOKEN_TO_BE_REPLACED

The research which led to the creation of these maps analysed the average rental prices for one and two bedroom homes close to each of the 125 stops and stations in the Greater Dublin Area for the period between April 2017 and March 2018.

Commuters living on the Dublin coastline pay the most on average, with rents close to Sandymount DART station averaging at €2,282 per month.

Those living in Sandymount (€2,282) pay on average double the rent of those living by the Cheeverstown Luas (€1,056).

Rents near DART stations are among the most expensive analysed. The top three priciest DART stations to live near are as follows:

END_OF_DOCUMENT_TOKEN_TO_BE_REPLACED

On the Luas, homes close to Spencer Dock on the red line command the highest average rents (€2,260), while those living close to the Charlemont stop (€2,091) pay most on the Luas green line.

Daft also analysed the average rents for each stop on the new Luas cross-city green line, which opened back in December 2017.

Properties close to the new Dominick stop, by the Rotunda, came out on top, with average monthly rents of €1,894.

popular
The JOE Friday Pub Quiz: Week 220
The JOE Movie Quiz: Week 80
Harry Styles hits back at critics who told him to be more 'manly'
Here's Week 58 of JOE's 19 in 90 quickfire quiz
Here are the 6 best movies on TV tonight
Status Yellow snow warning issued for five counties
Loads of Irish trying their luck for the $243 million Powerball lottery draw
You may also like
1 day ago
Six new Covid-19 deaths confirmed, 183 new cases
1 day ago
Gardaí renew appeal 20 years after disappearance of Sandra Collins
2 days ago
No corners were cut in vaccine process, says World Health Organisation
3 days ago
Over 300 Ford cars recalled in Ireland over battery issue that could lead to vehicle fire
3 days ago
Sale of luxury castle in Kerry, described as "one of Ireland’s best kept secrets”, completed for €4.5 million
4 days ago
Moderna vaccine trial shows 100% efficacy in dealing with severe Covid-19 infections
Next Page