“This is what this country has succumbed to."

A photo of five children sleeping on the chairs of a Tallaght Garda Station waiting room has gone viral on Thursday morning as the city's growing homelessness problem is thrust into the spotlight once more.

Five children in school uniforms, aged from one to 11, are photographed by their mother lying across rows of metal chairs without blankets after being advised by Gardaí to seek shelter there.

END_OF_DOCUMENT_TOKEN_TO_BE_REPLACED

Another two children are understood to be sleeping in the hallway, out of sight.

The mother involved had been applying to emergency accommodation and she was told to self-accommodate but could not do so.

Anthony Flynn, chief executive of Inner City Helping Homeless (ICHH), was one of those who reposted pictures on Twitter alongside the comment: “This is what this country has succumbed to, this is how homeless services are treating our children.

"I’m in utter shock, seven children sleep in one city Garda Station and eight families referred to stations as nowhere to send them.”

END_OF_DOCUMENT_TOKEN_TO_BE_REPLACED

Brian McLoughlin, Head of Communications for the ICHH, spoke to JOE about the photo which has brought serious attention to the crisis ravaging the city.

"So a family, a mother and seven children, slept in a Garda station in Tallaght last night. The mother presented the family to the Garda station, the Gardaí, in fairness to them, tried all the emergency numbers – and they even tried to source a hotel but couldn't do so.

"So they stayed there overnight, Gardaí gave them breakfast in the morning and they went over to South Dublin County Council Housing Department first thing this morning.

"The ICHH put two families up ourselves last night. We're already spent double our budget halfway through this year in comparison to what we spent last year. The Gardaí actually released a statement three months ago - saying families shouldn't be sent to Garda stations as they're not equipped or trained to work with them," he continued.

END_OF_DOCUMENT_TOKEN_TO_BE_REPLACED

"They told us that 'our people aren't trained for this, we shouldn't have this situation' but there's no alternative."

"They name-checked the ICHH specifically in this case but in this instance nothing was available.

"We're getting inundated with families, more so over the past 18 months – there should be no situation where a child is sleeping in a Garda Station. But sometimes there is just no other alternative.

"We've had roundtable discussions with Focus Ireland, the Director for Housing First, Garda Representatives which have ended in us (ICHH representatives) saying 'we're not government funded, we're volunteers, yet when we have a family who comes to us we will pull out a card even, if it costs us €500 for a family.

According to the Department of Housing, 9,872 people were in emergency accommodation during the week of 18-24 June, an increase of 26 people compared with the previous month.

The figure includes 6,048 adults and 3,824 children, with a rise of 28 adults and two fewer children accessing emergency accommodation compared with May. 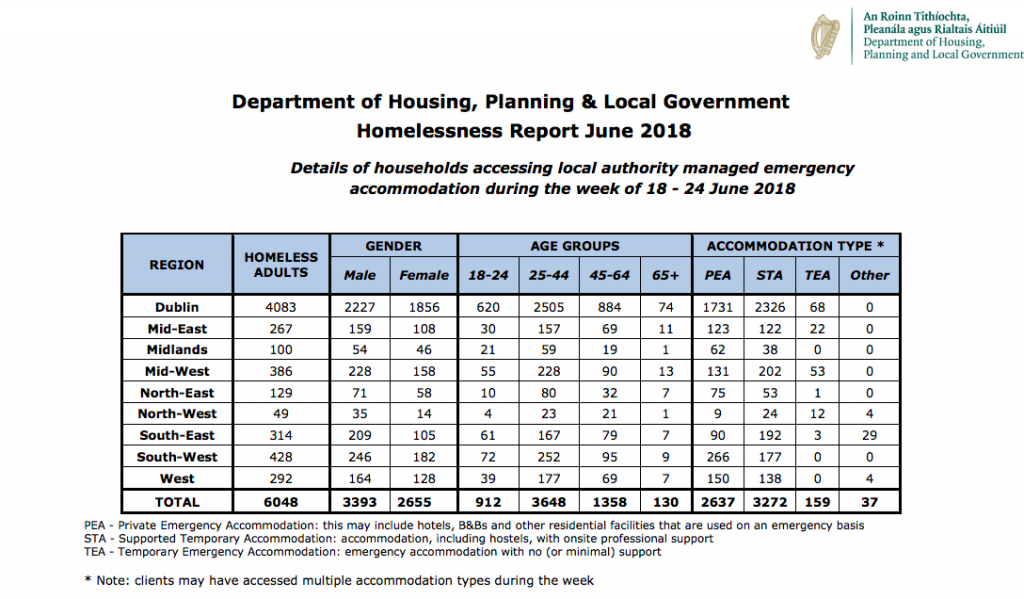 Dublin showed the biggest increase in homelessness over Murphy’s first year in office, with 1,266 more people in emergency accommodation than in June 2017.

Speaking about the latest monthly figures, the Minister said any increase in the number of people in emergency accommodation was “unwelcome”, but said it was “good to see a decrease” in the number of homeless children.

He added: “The increase from May to June 2018 was 26. For the corresponding period in 2017, we saw an increase of 242 adults and dependents so the change is much better when compared to last year.”

popular
Here is a list of every Bank Holiday in Ireland in 2023
QUIZ: Guess the movie from the movie poster
Nicola Bulley's phone found by the river 'could be a decoy', diving expert suggests
Woman dies from hypothermia after telling doctor she 'couldn't afford heating'
5 years ago, Hollywood took a massive gamble on a huge sequel... and lost big time
One of the best crime thrillers ever is among the movies on TV tonight
The Last Of Us Episode Five will premiere days earlier in Ireland and UK
You may also like
4 hours ago
Dublin property advertises 'bedroom' to rent with black plastic sheets instead of walls
4 hours ago
Mark Hamill on the one piece of dialogue he got removed from the original Star Wars
5 hours ago
Edward Scissorhands was very nearly played by a much-loved Oscar winner
6 hours ago
Magic Mike's Last Dance is about how horny we all are after the pandemic
7 hours ago
An incredibly fun action blockbuster is among the movies on TV tonight
7 hours ago
Little boy died of cancer after doctors ignored mother's warnings six times
Next Page