The Minister for Social Protection was speaking in Glasnevin cemetery at a commemoration for Michael Collins and Arthur Griffith on Sunday.

Leo Varadkar says that he expects to see a united Ireland at some point in the future, but insisted that it would not be achieved through, "assimilation or the crude majoritarianism in a border poll."

The Journal reports Varadkar as saying, "I share the vision of An Taoiseach that foresees a united Ireland at some point in the future, and I share his belief in how it should be achieved." 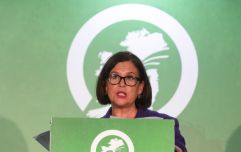 END_OF_DOCUMENT_TOKEN_TO_BE_REPLACED

The Minister for Social Protection said that a united Ireland could only be achieved through 'respect and consent,' with the Taoiseach previously inviting a border poll as part of the United Kingdom's forthcoming exit from the European Union.

"The only way we will achieve real unity is by respecting the different traditions, identities and values on this island, not by trying to obliterate them.

"It was easy for some to jump on the Brexit result, and use it to make a land-grab for Northern Ireland. And it was counterproductive."

"Brexit complicates matters considerably for this country, and we have to be prepared for a period of uncertainty before it is settled," he added.

popular
Lidl to launch its second 'reverse vending machine' in Ireland next week
Husband of school teacher killed in Texas shooting dies of heart attack
The 2 Johnnies share unbelievable catfish ordeal affecting over 40 people
Acclaimed actor Ray Liotta has died, aged 67
QUIZ: How well do you know these famous flights in movies and shows?
Amber Heard "distraught" as court hears explicit Johnny Depp text message
Two excellent crime thrillers are among the movies on TV tonight
You may also like
1 year ago
Tonight's Claire Byrne Live to ask if it's time for a united Ireland
1 year ago
Majority of English people 'pleased' or 'not bothered' by prospect of united Ireland
2 years ago
A united Ireland would be a "different state", says Leo Varadkar
3 years ago
Exit poll finds two-thirds of voters would vote in favour of a united Ireland
3 years ago
Sinn Féin TD tells Dáil a united Ireland is the way forward
3 years ago
University of Oxford debating society slammed for hosting debate on Irish reunification
Next Page