If you thought this weekend was bad, we've got some even worse news for you.

Yep, it does feel like Winter has finally descended upon us here in Ireland.

This weekend in particular had everyone running for the immersion, their biggest jumpers and their warmest jackets, as the temperatures plummeted enough to cause frost on the majority of roads across the country.

With a risk of snow and ice in the coming days, remember to exercise additional caution when driving and that your stopping distance will increase significantly. For more advice on driving in icy conditions check out our blog: https://t.co/C0zghHeJjS pic.twitter.com/skSaMxrZcA 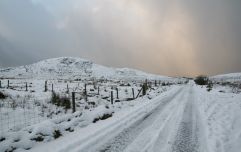 END_OF_DOCUMENT_TOKEN_TO_BE_REPLACED

And now, according to the folks at Met Éireann, after just one day of brief and slight respite, weather conditions are going to continue to plummet as we continue further into December.

Here is what to expect from early next week:

A bright, blustery, showery day. Many of the showers will be heavy and prolonged, especially in southwestern, western and northern areas. Some local hail and thunder also. Temperatures 6 to 9 C., at best and feeling colder in the fresh to strong and gusty westerly winds. 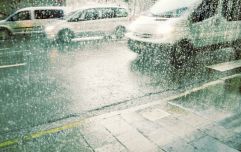 END_OF_DOCUMENT_TOKEN_TO_BE_REPLACED

Showers will become increasingly confined to the coastal fringes of Ulster, Connacht and west Munster, with a few turning wintry about higher ground. Turning cold under clearing skies with frosts forming, together with a risk of icy patches. Minimum temperatures of 0 to +4 degrees, coldest in the east. Fresh to strong northwesterly winds will fall light to moderate inland.

Cold, clear and crisp with long spells of sunshine in most parts. Occasional showers will continue to feature in Atlantic coastal counties and about the Ulster coast, however, turning wintry on higher ground. Afternoon highs will range 5 to 8 degrees Celsius and it will likely feel chilly in the mostly moderate northerly breezes which will be fresh to strong at times near coasts.

Showers in north Ulster and northwest Connacht, turning wintry inland and about higher ground. Elsewhere, largely dry and cold under clear skies. Lows of -2 to +3 degrees with a widespread frost forming and a risk of icy patches. North to northwest winds will fall light inland, but will remain moderate to fresh near coasts. 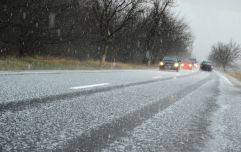 END_OF_DOCUMENT_TOKEN_TO_BE_REPLACED

Long clear or sunny spells for many, but showers will continue to affect north Ulster and northwest Connacht, with some wintry precipitation possible inland. A cold day with afternoon highs of just 4 to 6 degrees Celsius in light to moderate northwest or northerly breezes.

Largely dry away from north and northwest coasts with long clear spells. Lows of -2 to +2 degrees with a widespread frost and a risk of icy patches.

House of Rugby Ireland · Quinn Roux on finding a home in Ireland and Mike McCarthy brings the absolute HEAT!
popular
Accumulations of snow in many areas forecast as temperatures set to drop below freezing
Aodhán Ó Ríordáin passionately calls out Norma Foley in the Dáil
Joe Biden has removed a bust of Winston Churchill from the Oval Office
The full list of all the new shows and movies coming to Netflix in February
‘Dark red’ zones with stricter travel restrictions set to be introduced in the EU
Here's the lineup for The Late Late Show this week
10 prequels that are actually better than the movies that came before
You may also like
1 week ago
Weather warnings in place with temperatures expected to drop to -8
2 weeks ago
Temperatures to plummet to as low as -8 degrees tonight
2 weeks ago
Snow, ice and low temperature warnings issued for all of Ireland
2 weeks ago
Tuesday set to be "coldest night of winter" so far
2 weeks ago
‘Sudden Stratospheric Warming Event’ forecast for Ireland early this month
2 days ago
Ireland's first Covid-19 vaccine recipient gets her second dose
Next Page