Ireland ranked best in the world for Covid resilience, according to a new study

The report hails a "startling turnaround" for the country.

Ireland has been named as the best country in the world in terms of how it has dealt with the ongoing pandemic, particularly with regards to tackling the Delta variant, via a comprehensive new study.

Published on Tuesday (28 September), the Bloomberg Covid Resilience Ranking index credits Ireland with a "startling turnaround" when compared to January of 2021. At that time, Ireland's Covid outbreak was regarded as the worst in the world.

The cleanest towns in Ireland have been named

END_OF_DOCUMENT_TOKEN_TO_BE_REPLACED

The report points to Ireland's vaccination rollout, noting how the country "pulled off the startling turnaround with a strategy used Europe-wide" in order to tackle and quash the Delta variant.

"Even as the peak summer travel season unfolded alongside delta’s spread, Ireland and places like Spain, the Netherlands and Finland held down serious illness and deaths through pioneering moves to largely limit quarantine-free entry to immunised people," notes the introduction to the study.

"Bestowing more domestic freedoms on the inoculated helped boost vaccination levels to some of the highest in the world—over 90% of Ireland’s adult population has received two shots—while allowing social activity to resume safely." 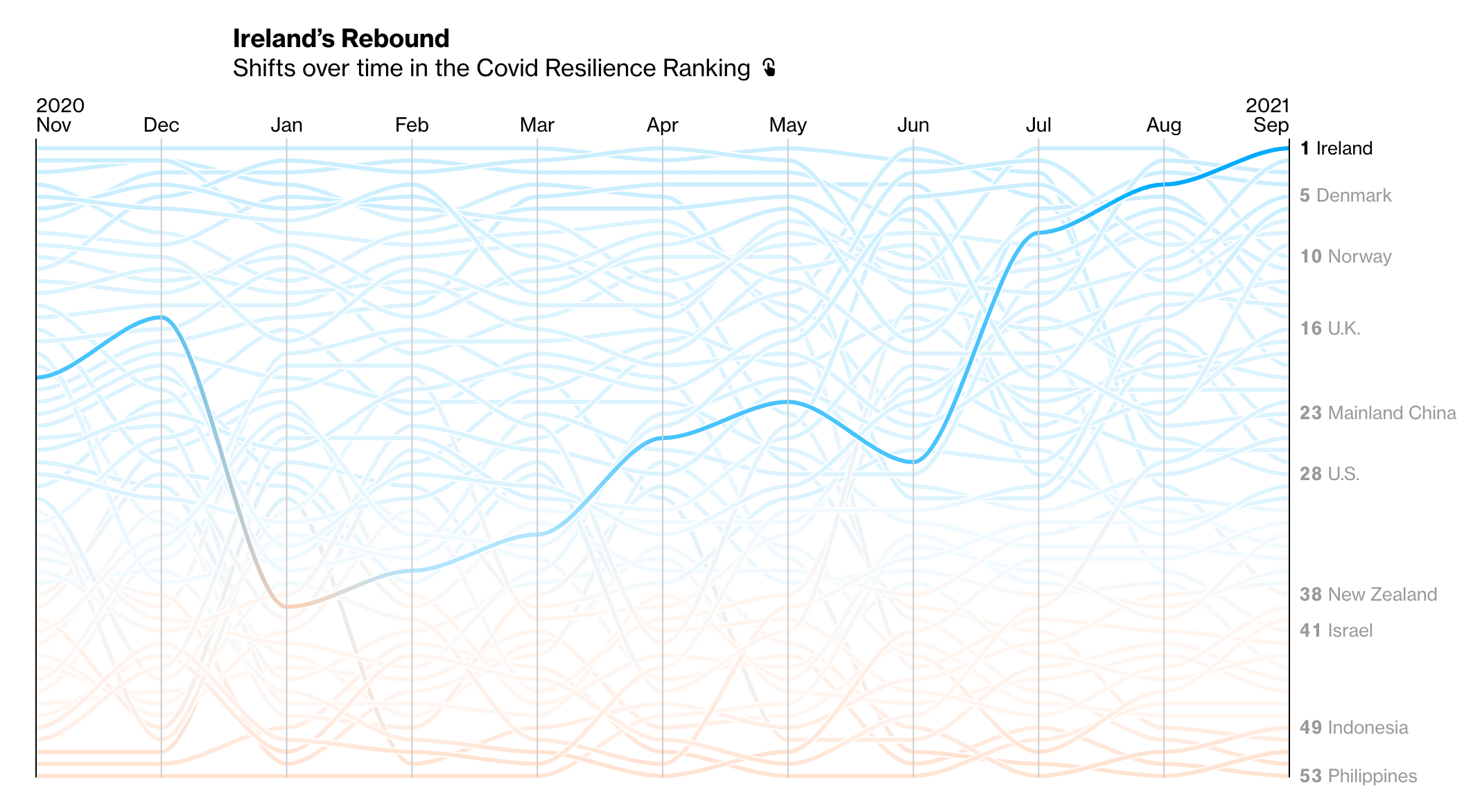 The report notes a sharp contrast between Ireland and the United States of America, with the latter "left reeling" by the Delta variant in the form of a surge of cases and deaths, and a major hit to the overall economy.

Ireland's position as a new world leader in terms of living with the pandemic comes "thanks to one of the world’s best vaccination rates, projections for a rapid economic rebound and the government’s decision this month to loosen both domestic restrictions as well as travel quarantine rules."

END_OF_DOCUMENT_TOKEN_TO_BE_REPLACED

The report also notes that weekly Covid fatalities "hover in the double digits" though takes time to sound a note of caution, pointing to a premature reopening of society in late 2020 that triggered a record spike in cases.

"Ireland—and Europe’s—continued success will depend on widespread vaccination severing the link between easing curbs and virus spread," surmises the Bloomberg report.

As for the overall ranking, the table has Ireland followed by Spain, Netherlands, Finland, Denmark, United Arab Emirates, France, Switzerland, Canada and Norway. 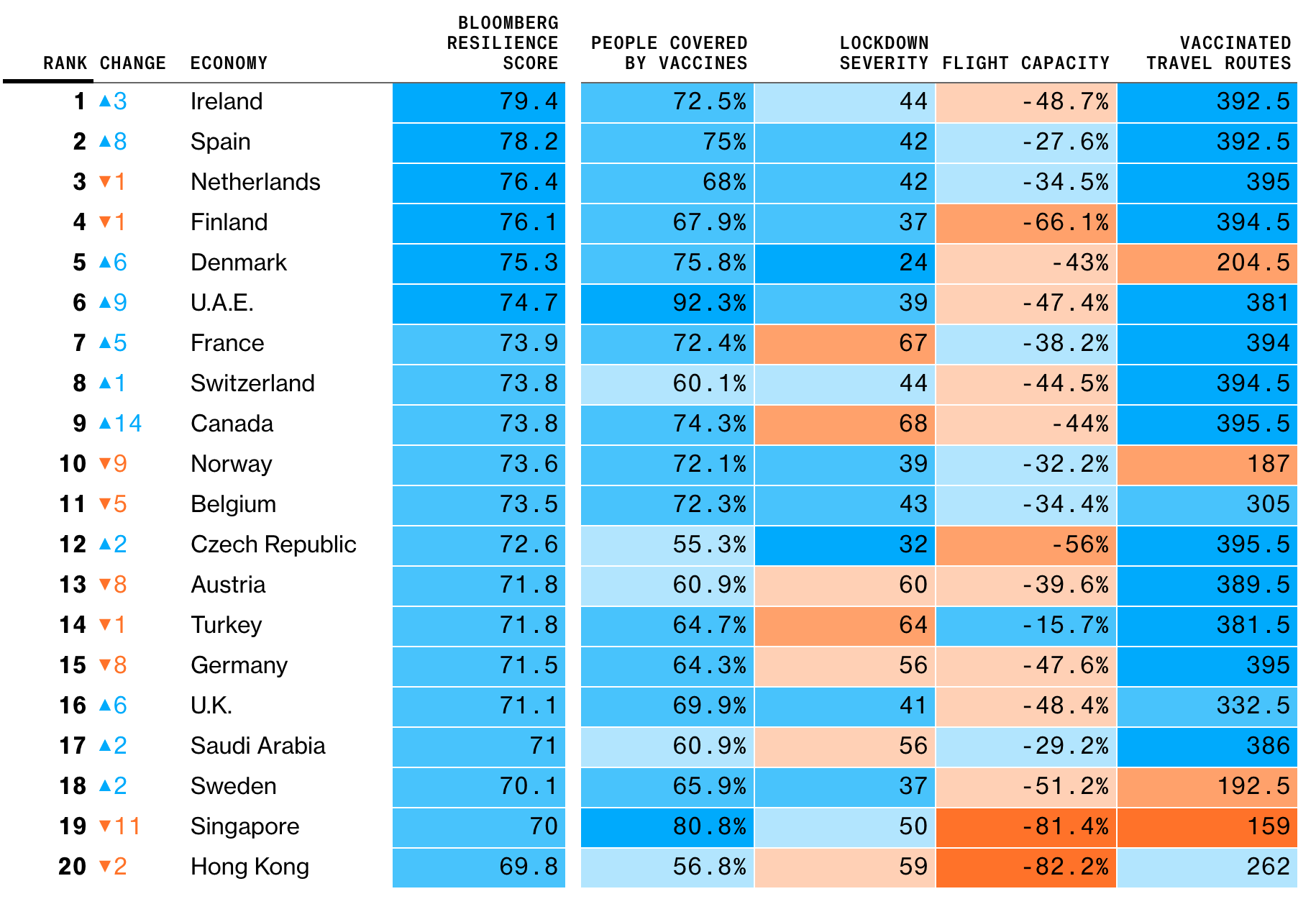 The Big Reviewski || JOE · The Big Reviewski with Andy Serkis, Squid Game follow-ups & the return of Succession
popular
The cleanest towns in Ireland have been named
QUIZ: Can you master this General Knowledge Quiz?
The JOE Friday Pub Quiz: Week 265
Gardaí investigating after man robs hotel at knife point in Kerry
Ryanair is seeking applicants for "the worst job in Ireland"
The JOE Movie Quiz: Week 124
All the trailers dropped by DC: The Batman, The Flash, Shazam, Aquaman, Peacemaker and more
You may also like
18 hours ago
Man arrested after multiple taxi drivers robbed at knife point in Cork
18 hours ago
Micheál Martin says Government "not contemplating going backwards" on Covid-19 restrictions
20 hours ago
Investigation launched after window smashed at Canada Goose store in Dublin
1 day ago
Emergency services rush to high-rise building on fire in Tallaght
1 day ago
Two prisoners who absconded from Loughan House in Cavan arrested by Gardaí
1 day ago
"No doubt" health system heading into difficult winter, says HSE chief
Next Page