"The whole process seems to be once you've filled in the paperwork - go away, and don't annoy us until you get your bags back."

An Irish emigrant travelling to Ballymena in order to scatter the ashes of his father and mother has found himself in limbo after the bags containing his parents' remains were lost following an Aer Lingus flight from Milan to Dublin.

Speaking on Drivetime on RTÉ Radio 1 on Tuesday evening en route to a planned funeral service scheduled to take place on Wednesday, Bob Gilmour first explained how his parents met years ago.

END_OF_DOCUMENT_TOKEN_TO_BE_REPLACED

"It's a fairly typical story from their generation, I guess," he began.

"My parents met in the Royal Air Force during the second World War.

"Dad was an Irishman serving and my mum was a Birmingham lass, serving, and they met, fell in love, married, came home to live in Ireland, raised a family, and then in the '60s made the decision to emigrate to Australia."

Gilmour explained that he, along with his family, subsequently grew up in Australia but how his mother and father always saw themselves as English and Irish, respectively.

As such, both indicated that they would like their ashes scattered in their home countries when they passed away.

Gilmour intended to carry out those wishes in Ballymena and Birmingham, only for the remains of his parents to go missing along the way.

"'What happened?' is a good question," he noted, adding that the check-in for the flight from Milan on Saturday (3 August) was "chaotic".

END_OF_DOCUMENT_TOKEN_TO_BE_REPLACED

"When we eventually got to Dublin, the bags were not on the aircraft and two of them haven't been seen since."

Gilmour said that he has filled out the requested paperwork but has yet to retrieve the sensitive items in question.

"They're still in limbo somewhere. We've kind of been making jokes about it on Facebook, that mum and dad have decided to elope again or they're on a world tour while they've still got a chance." 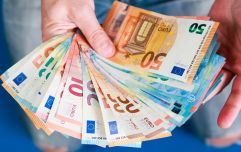 National Lottery reveals 28 locations where tickets worth over €35,000 each were sold

END_OF_DOCUMENT_TOKEN_TO_BE_REPLACED

Gilmour confirmed that he has had "absolutely zero success" in making contact with Aer Lingus following the incident, describing the process of recovery from the customer's perspective via a website and call centre as "less than useless".

"The whole process seems to be once you've filled in the paperwork - go away, and don't annoy us until you get your bags back," he said.

The service in Ballymena on Wednesday is still set to take place, regardless of the presence of the ashes.

In a statement issued to JOE on Tuesday evening, an Aer Lingus spokesperson apologised for the situation.

"We recognise the sensitivities of this particular situation and are working with all the parties involved to retrieve the baggage as quickly as we can."

The missing baggage has been located, per an updated statement issued to JOE.

"Aer Lingus can confirm that the missing baggage has been located in Milan Malpensa Airport," a spokesperson said.

"Regrettably, it was not loaded onto the Aer Lingus flight by the baggage handlers at Malpensa Airport.

"The baggage will now arrive overnight into Dublin Airport where it will be immediately transported to the family.

"We sincerely apologise for the inconvenience caused."

You can listen to the Drivetime interview below.

popular
Ryanair is seeking applicants for "the worst job in Ireland"
The JOE Friday Pub Quiz: Week 265
QUIZ: Can you master this General Knowledge Quiz?
National Lottery reveals 28 locations where tickets worth over €35,000 each were sold
Warning after person has bank account cleared out hours after scam text
NEW JOBS ALERT! If you're looking for a new career, this opportunity could be perfect for you...
PICS: The man with the biggest penis in the world has one unbelievable problem with it
You may also like
16 hours ago
Ryanair is seeking applicants for "the worst job in Ireland"
18 hours ago
Deputy CMO advises public to "work from home where possible" this autumn and winter
18 hours ago
Woman (40s) in critical condition following two-car collision in Kilkenny
19 hours ago
Flogas Energy customers face significant hike in electricity and gas prices
1 day ago
Simon Harris outlines three urgent options for easing restrictions next week
1 day ago
Unusual summer temperatures are on their way this weekend
Next Page