He was forced to deny the claims after footage went viral of him bending down at his green room table.

The lead singer of the Italian band that won Eurovision 2021 has denied claims that he did "a line" of drugs during Saturday night's show.

Footage of Måneskin singer, Damiano David, went viral after a green room clip showed the musician bending down at his green room table, with some people insinuating he had taken drugs during the show.

END_OF_DOCUMENT_TOKEN_TO_BE_REPLACED

The lead singer of Måneskin has hit back after the viral clip and has slammed accusations of drug-taking.

David was asked about the clip at a press conference after the contest and said the allegation was completely false, telling reporters “I don’t do drugs”.

He explained that his bandmate has broken a glass with his leg, adding that he was simply helping clear up, and offered to take a drug test.

There is no evidence to suggest Damiano was involved in any misconduct, however, viewers flocked to Twitter during Saturday's show to speculate on the clip.

END_OF_DOCUMENT_TOKEN_TO_BE_REPLACED

One user penned: "Did someone just do a line live on #Eurovision telly!!?"

"Lines are closed, but not for Italy," added another.

A third wrote: "Does Italy's singer realise this is being live broadcast across an entire continent?"

The European Broadcasting Union has released a statement this afternoon which said that the organisation is “aware of the speculation surrounding the video clip”. 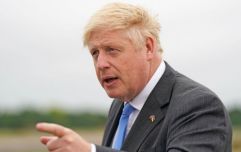 END_OF_DOCUMENT_TOKEN_TO_BE_REPLACED

“The band have strongly refuted the allegations of drug use and the singer in question will take a voluntary drug test after arriving home. This was requested by them last night but could not be immediately organized by the EBU.

“The band, their management, and head of delegation have informed us that no drugs were present in the Green Room and explained that a glass was broken at their table and it was being cleared by the singer.

“The EBU can confirm broken glass was found after an on-site check. We are still looking at footage carefully and will update with further information in due course.”

The rock group from Rome, beat out France and Switzerland to clinch the first place slot with their song Zitti E Buoni on Saturday night.