His departure will be shown in tonight's episode of the show.

According to Huff Post UK, Jacques left the villa earlier today. A spokesperson confirmed his departure saying: “Jacques has made the decision to leave the Villa. He will explain his reasons to the Islanders during tonight’s episode.

“We fully support his decision and look forward to seeing what’s next for Jacques.”

Jacques entered the villa as a bombshell and as contestant Gemma's ex boyfriend. He later coupled up with Paige. 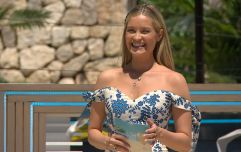 END_OF_DOCUMENT_TOKEN_TO_BE_REPLACED

He was highly criticised online for his actions during Casa Amor. In recent episodes he tried to win back Paige by leaving her a note in her bed and reading her a speech from his phone.

Jacques is the second of this year's contestants to exit the villa without being dumped.

popular
Parents left in shock after gorillas start mating in front of kids at zoo
Conor Mcgregor hit by car ‘at full speed’ while cycling
Harvard study reveals how many times men should ejaculate each month to stay healthy
Colin Farrell shouldn't win the Oscar this year
Close call as Paul McCartney tries to pose on Abbey Road crossing
The JOE Friday Pub Quiz: Week 331
DJ accidentally shoots herself in the face with a confetti cannon while performing
You may also like
5 days ago
Love Island's Haris reportedly dumped from villa after street brawl video
1 week ago
ITV is launching a 'Love Island' for the older generation
1 week ago
New Love Island 'bombshells' Zara and Davide already shaking up the main villa
2 weeks ago
"Hopefully it was a catalyst to get lads talking" - Greg O'Shea on Late Late Show appearance
2 weeks ago
The 2023 Love Island cast has been announced
1 month ago
Laura Whitmore explains why she really left Love Island
Next Page