As we're sure you've heard, Roy Keane and Jonathon Walters have been having a bit of a back and forth lately.

It started with Keane speaking at a live event and calling out Walters for his behaviour both as a player, and as a pundit since he retired. 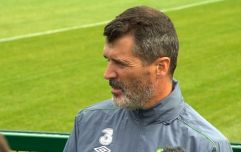 END_OF_DOCUMENT_TOKEN_TO_BE_REPLACED

He said: "Imagine if Jon won a trophy. He talks a good game. He goes on the TV, on about how he was harshly treated by me. Not kicking a ball for Burnley for two or three years. On TV, crying about his family situation. You know, how about lying low for a while, taking it easy. Have a look at his medals? Wouldn’t take long."

Walters then responded on JOE's Liquid Football podcast, saying: "But there’s a difference between being a hard man on the pitch and being a tough guy. Just because someone has a sharp tongue or a stare, doesn’t make them a tough guy."

And more recently, Jason McAteer has since weighed in on the whole thing.

McAteer does in fact have a horse in this race, as Keane also took aim at him during the same liveshow. Keane criticised him for supposedly living off his past glories, referencing his iconic goal against Holland.

He has since responded to the comments, speaking to Talksport.

He said: "I think he got wrapped up in the environment, everyone was laughing, there was a lot of people in the audience and he maybe got a little bit too comfortable with his comments and he let himself down.

"As far as of the other comments between them, they are Roy’s opinions and Jonny has come out and said what he needed to say about the situation, and it’s just whose story you believe. 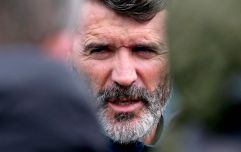 END_OF_DOCUMENT_TOKEN_TO_BE_REPLACED

"Roy does like the medals one, but at the end of the day you can’t take the medals down the pub and have a pint with them. They don’t talk back to you.

We wonder how Keane will respond...

popular
One of the best action movies of recent years is finally available to watch at home
QUIZ: Try score top marks in the hardest country flag quiz you'll ever take
Lisa Fallon praised as she opens up about terrifying ordeal on Late Late
The JOE Friday Pub Quiz: Week 278
QUIZ: See if you can ace this General Knowledge Quiz
A terrifying horror film is among the movies on TV tonight
"It will be with me until I die" - Charlie Bird opens up about "loveliest gesture" from Daniel O'Donnell
You may also like
4 months ago
Roy Keane has finally talked about his Instagram account and it's classic Keane
11 months ago
Roy Keane reacts to the dancing Keano FIFA TikTok meme
1 year ago
WATCH: Lad who wrote letter to Jürgen Klopp meets Roy Keane on The Late Late Show
1 year ago
Roy Keane will be appearing on this week's Late Late Show
2 years ago
WATCH: Roy Keane told to "f**k off" in cameo appearance in new season of The Young Offenders
2 years ago
Donncha O’Callaghan's interview with Roy Keane looks absolutely unmissable
Next Page