"All of us on both sides of the Irish Sea have a responsibility to maintain hope for the future."

Jeremy Corbyn has shared a moving speech commemorating the 20th anniversary of the Good Friday Agreement, in which he pays tribute to the people who brought together its conception, as well as those striving to continue its legacy. 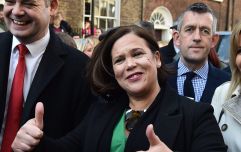 END_OF_DOCUMENT_TOKEN_TO_BE_REPLACED

"The Good Friday Agreement was a defining moment in Irish history which allowed peace to prevail," Corbyn wrote.

"It was a great achievement and I pay tribute to the work done by Tony Blair, Mo Mowlam and Paul Murphy, as well as those on all sides in Ireland, north and south, in achieving the crucial breakthrough of the peace process.

"No one wants to be marking the twentieth anniversary of the agreement while the assembly at Stormont remains suspended. Efforts must be redoubled to restore the assembly, and to ensure a lasting open border as part of the Brexit negotiations.

"There must be no return to a hard border between north and south, and no return to the horrors of the troubles. All of us on both sides of the Irish Sea have a responsibility to maintain hope for the future.

"The history of Ireland is a great teacher of oppression and brutality, imagination and poetry. For Irish communities everywhere – including in my own constituency – the Good Friday Agreement will always embody their hopes for peace and justice. We must cherish and learn from it for the future."

Corbyn welcomed the agreement at the time and along with the vast majority of MPs in Westminster, he endorsed it by voting for the Northern Ireland Bill in July 1998, saying: "We look forward to peace, hope and reconciliation in Ireland in the future."

Tánaiste Simon Coveney also spoke about the anniversary of the Good Friday Agreement at Queen's University in Belfast on Tuesday.

"Relief and joy took the place of despair. A new hope and faith in our politics, in our people and in each other took root that day," Coveney said.

Coveney's speech in full can be read here.

The Big Reviewski || JOE · M. Night Shyamalan, Alex Wolff & Thomasin McKenzie talk about their new creepy thriller Old
popular
QUIZ: Ignite your brain cells with this testing general knowledge quiz
The JOE Movie Quiz: Week 112
Arlene Foster joins GB News as contributor on Nigel Farage's Political Correction show
Sunshine and high temperatures to come to an end as Met Éireann predicts week of thunder and rain
The JOE Friday Pub Quiz: Week 253
The JOE Music Quiz: Week 67
The 50 most iconic songs of all time* have been revealed
You may also like
2 days ago
Leo Varadkar’s comments about “naming and shaming” employers show he's living in a fantasy land
1 week ago
"Spare me the history lecture" - Mattie McGrath and Micheál Martin in Dáil row over Nazi Germany comparisons
2 weeks ago
Mary Lou McDonald lays into Micheál Martin in heated Dáil debate, says Government are “failing miserably”
3 weeks ago
TDs basic salary to rise to over €100,000 from today
3 weeks ago
Sinn Féin have more MLAs than DUP for first time in history following Alex Easton's resignation
4 weeks ago
Oireachtas spends €1.8 million on sittings in Convention Centre as return to Leinster House ruled out
Next Page