Foreign secretary Jeremy Hunt wrongly said the country was being controlled by the USSR.

Jeremy Hunt has wrongly claimed Slovenia was a "vassal state" of the Soviet Union.

He was visiting Ljubljana to discuss the Brexit negotiations with his counterpart Miro Cerar, and demonstrated ignorance of the country's recent history.

Slovenia was a state, within Yugoslavia, outside of the iron curtain.

Jeremy Hunt casually saying that Slovenia was a “Soviet vassal state”. Former president of Slovenia saying, “he comes to Slovenia asking us for a favour [to discuss how to avoid a no-deal] while arrogantly insulting us. We were never a vassal state” 🇪🇺

Jeremy Hunt said: "This is my first visit to Slovenia as foreign secretary, not the first in my life, but my first in a professional capacity. 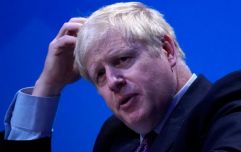 END_OF_DOCUMENT_TOKEN_TO_BE_REPLACED

"I’m really happy to be here, because as a fellow European country the UK is very proud of the transformation there has been in Slovenia over the last 30 years.

"A really remarkable transformation from a Soviet vassal state to a modern European democracy, a member of the EU, a member of Nato, a country with a flourishing economy, growing its tourism year in, year out, and this is really an example of Europe at its best."

Milan Brglez, the former speaker of Slovenia’s national assembly, responded on Facebook, writing: "We have never been 'the vassal state of the Soviet Union.'

"At a minimum what I expect from my representatives is that they will react immediately when someone insults the state and its citizens. And not that they are meekly silent, perhaps not even noticing the insult."


popular
Here's Week 21 of JOE's 19 in 90 quickfire quiz
Interactive infographic shows real-time spread of coronavirus outbreak
The 50 most iconic songs of all time* have been revealed
Galway parish reports record high attendance at Ash Wednesday drive-thru
Emirates is recruiting new cabin crew members in Galway for tax-free jobs
Rallies prove that Sinn Féin are playing the game better than anyone else right now
Singer Duffy reveals she was drugged and raped while being held captive
You may also like
7 months ago
Evening Standard publishes cartoon depicting Boris Johnson as a leprechaun and... it's bad
8 months ago
Will anyone survive the leap of faith that is the Tory leadership contest?
3 days ago
Body of a man found in drain in Donegal
3 days ago
Man arrested after firearms seized during overnight operation in Dublin
3 days ago
Met Éireann updates rainfall warning, adding Limerick to the mix
3 days ago
Met Éireann issue rainfall warning for 19 counties, with a side of snow
Next Page