'The language was wrong and deeply insensitive to many of those who lost loved ones.'

There have been calls for the Northern Ireland Secretary of State Karen Bradley to resign following her comments about security force killings that she made on Wednesday.

Initially, Bradley had said that "Over 90% of the killings during the Troubles were at the hands of terrorists, every single one of those was a crime. The fewer than 10% that were at the hands of the military and police were not crimes. They were people acting under orders and under instruction and fulfilling their duty in a dignified and appropriate way."

END_OF_DOCUMENT_TOKEN_TO_BE_REPLACED

This was met with an intense reaction by the families of the victims of those killed by security force members during the Troubles, who had then called for the Northern Ireland Secretary of State to step down from her position.

On Thursday afternoon, Karen Bradley then issued a full apology for her comments:

"Yesterday I made comments regarding the actions of soldiers during the Troubles. I want to apologise. I am profoundly sorry for the offence and hurt that my words have caused.

"The language was wrong and even though this was not my intention, it was deeply insensitive to many of those who lost loved ones. 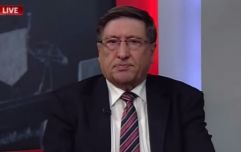 END_OF_DOCUMENT_TOKEN_TO_BE_REPLACED

"I know from those families that I have met personally just how raw their pain is and I completely understand why they want to see justice properly delivered. I share that aim and that is why I launched the public consultation on addressing the legacy of the troubles.

"My position and the position of this Government is clear. We believe fundamentally in the rule of law. Where there is any evidence of wrongdoing this should be pursued without fear or favour whoever the perpetrators might be.

"That is a principle that underpins our approach to dealing with legacy issues and it is one from which we will not depart."

Northern Ireland Secretary of State Karen Bradley has apologised for her comments regarding The Troubles. pic.twitter.com/yatVKPupLi

popular
QUIZ: How well do you really know Irish weather?
25 years ago, Sylvester Stallone delivered his best performance in a hard-hitting crime drama
QUIZ: You'll do well to get 100% in this General Knowledge Quiz
Disney+ has just added 10 big movies to its library
Dublin Airport reduces the recommended arrival times for passengers
Why Bran Stark is the true villain of Game of Thrones
QUIZ: Can you get 10/10 in this Irish sayings quiz?
You may also like
3 years ago
PICS: Gucci issue apology following reaction to "blackface sweater"
8 years ago
Luis Suarez has publicly apologised to Giorgio Chiellini for THAT bite
8 years ago
Video: Last night’s Après Match parodied Eamon Dunphy’s apology perfectly
8 years ago
Vine: Eamon Dunphy apologises for dropping the F-Bomb live on TV earlier this evening
8 years ago
Shelbourne FC issue apology for the unavailability of tea at Tolka Park on Friday night
8 years ago
Shia LaBluff takes to the LA skies to apologise for all of his recent plagiarising
Next Page