Ewe won't baaaahhhh-lieve what's going on in this UK theatre.

Not that we want to ram too many sheep-based puns down your throat, but hopefully all's wool that ends wool for the London production of King Lear with Sheep.

You have to marvel at the shear ingenuity of the production, as lead actor Alasdair Saksena is tormented by a cast of eight muttonous sheep, with audience members sitting around on hay bales and being entertained by the woolly fellowsheep. 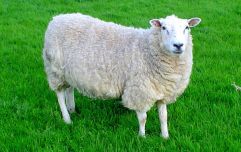 END_OF_DOCUMENT_TOKEN_TO_BE_REPLACED

"Who is it that can tell me who I lamb?"

The press release reads: King Lear with Sheep is an experimental re-evaluation of its famous predecessor that overturns theatrical conventions through the startling and revolutionary device of costumed sheep. Sheep! In tiny costumes!

If you're in London and fancy heading along, tickets are only a £10 or £8 with concessions. Good to see they're not trying to fleece their audience.

The Big Reviewski || JOE · The Big Reviewski with Andy Serkis, Squid Game follow-ups & the return of Succession
popular
Confusion reigns over social distancing element to nightclub reopening plan
Claire Byrne was having absolutely none of Nigel Farage's claims on Monday night
Here's what you can and can't do from Friday as restrictions change
CONFIRMED: Nightclubs to reopen, weddings at full capacity and Covid Passes to remain
An underrated Denzel Washington thriller is among the movies on TV tonight
Full return to offices “as we knew them” won’t happen this year
Nightclubs will reopen but with certain restrictions, hospitality restrictions to remain in place
You may also like
3 years ago
Irish teenager injured when hit by falling sheep in Mourne Mountains
4 years ago
11 things you will only know if you grew up in rural Ireland
4 years ago
PIC: This GAA club are a little 'sheep'-ish about their latest problem
4 years ago
WATCH: People are flocking to this barber shop in Kildare for a haircut
4 years ago
24 stolen sheep find their own way back to their owner in Kerry
4 years ago
WATCH: Ryan Tubridy drinking Siobhán the Sheep's milk was the highlight of the Late Late Show
Next Page