Every team paid tribute to the late Kobe Bryant in their own ways, with the Lakers understandably being the most emotional.

In the past seven days, people from all over the world have mourned the deaths of Kobe and Gianna Bryant.

A number of NBA games had been postponed in the immediate aftermath of the legendary NBA player's death, but a full set of matches took place on Friday night. 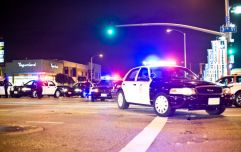 END_OF_DOCUMENT_TOKEN_TO_BE_REPLACED

Before the LA Lakers (who Kobe played for for 20 years) took the court to play against the Portland Trailblazers, LeBron James stepped out to pay tribute to Bryant in front of a packed crowd.

He spoke about what an incredible player Kobe was, and more importantly, what an excellent father he was.

James was close to tears throughout the entirety of his emotional speech, closing it off by saying: "In the words of Kobe Bryant - 'Mamba Out', but in the words of us - 'Not forgotten.' Live on brother."

Usher was also in attendance to perform a rendition of 'Amazing Grace', while Wiz Khalifa and Charlie Puth performed their song 'See You Again' at half-time.

Brooklyn Nets player Kyrie Irving, who was a close friend of Kobe's, celebrated by pointing to the sky after scoring a fadeaway shot, a move synonymous with Kobe Bryant.

After his 54th point, Kyrie pointed to sky for Kobe.#MambaForever pic.twitter.com/EECnpQBqiG

popular
Travis Barker rushed to hospital after tweeting "God save me"
Gardaí issue update on investigation into murder of Sophie Toscan du Plantier
R Kelly sentenced to 30 years in prison for sex trafficking and racketeering
The 100 best clubs in the world have been revealed
Amazon Prime Video has just quietly added 15 big movies to its library
Calls for €20 social welfare increase and minimum wage of €13 in new Budget
The 10 best TV shows of 2022 so far
You may also like
1 year ago
QUIZ: Can you name all the teams in the NBA from their locations?
1 year ago
All NBA players and staff take knee during national anthem
2 years ago
How to shite-talk your way through the NBA season
3 years ago
WATCH: Drake comes in for criticism following his behaviour at NBA playoff game
3 years ago
Oblivious basketball fan stars in the dumbest moment in TV history
3 years ago
Steph Curry involved in car crash on way to Warriors training facility
Next Page