Labour MP quits party because it's 'racist', immediately refers to 'people who are a funny tinge' during BBC interview

Good to see that politics in the UK is going as strong as ever.

This morning Angela Smith announced herself as one of the co-founders of the new Independent group, a political group formed by seven rebel MPs who quit Labour.

At the announcement press conference, the MPs stood up, one after the other, and passionately highlighted the key factors in their decision to leave the party, including Jeremy Corbyn's approach to Brexit, racism in the form of anti-Semitism within the party and the growing influence of the "hard-left". 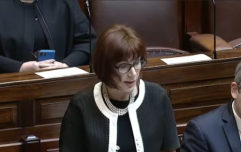 END_OF_DOCUMENT_TOKEN_TO_BE_REPLACED

In fairness to Smith, managed to last - what was it? A couple of hours? Three max? - before appearing on the BBC as a representative of her new political movement and completely fucking it.

How you ask? By actually answering a question by saying the following sentence, during an interview on the subject of whether racism remains a problem in Britain: "It's not about being black or a funny tinge-" before interrupting herself to add, "from the BAME community".

Smith resigned from her seat as representative for Penistone and Stocksbridge, which she had held since 2010. In her resignation speech, she cited her 'Labour family' and 'working-class pride' before going on to explain the reasoning behind her decision.

She stated that "the Labour is a party now characterised by intolerance" and "fosters division rather than unity" before concluding that she could not "in all conscience, continue to affiliate with a Labour Party that I consider unfit for government".

Since then, she has posted an 18-second apology video, where she states that she aims to fight racism at every possible chance.

Less than six hours since the Independent Group was announced, there is an apology from one of its members following a racism storm. This is going sooo well pic.twitter.com/cvd8bzzBbQ

House of Rugby Ireland · Munster's nail-biting win, European games in doubt and Darren Cave interview
popular
QUIZ: Can you name the Marvel Cinematic Universe film from just a single screen shot?
QUIZ: Can you pass your driving test and guess the meaning of all these road signs?
QUIZ: Name all the countries of the EU that contain 2 vowels or less
QUIZ: Can you correctly identify these European country flags?
The JOE Movie Quiz: Week 85
The JOE Friday Pub Quiz: Week 226
QUIZ: Can you recognise each of these iconic Dublin pubs?
You may also like
6 days ago
Micheál Martin says he is not ashamed at government's handling of Covid-19 crisis in Ireland
6 days ago
Nancy Pelosi says House will proceed with impeaching Donald Trump
1 week ago
Donald Trump finally accepts "a new administration will be inaugurated" on 20 January
1 week ago
Sacha Baron Cohen calls for Donald Trump to be banned from social media permanently
1 week ago
Donald Trump pressured Georgia official to “find” enough votes to change election result
1 month ago
Simon Coveney describes Sinn Féin TD’s tweet about IRA attacks as “really insensitive and stupid”
Next Page