There is no rule that says the leader of a country must be polite. Indeed, it would be ludicrous to expect a Taoiseach to be unfailingly courteous when dealing with members of the opposition.

What should be expected, or even demanded, is that the leader of a country be capable of compassion for the people he leads. 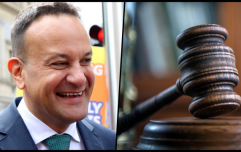 END_OF_DOCUMENT_TOKEN_TO_BE_REPLACED

On Tuesday, Leo Varadkar proved once again that compassion is not his style.

Speaking in Dáil Éireann, TD Gino Kenny told the Taoiseach of a Waterford family who are accessing medicinal cannabis in the Netherlands, at a cost of €9000 a year, that they can no longer afford, as the government has not moved to establish an access programme for medicinal cannabis

He ended by saying: "Taoiseach, this is so important. I've been banging this drum for the last two years. I'm so frustrated. Is there a commencement date for the Cannabis Access Programme?"

In answering, Leo did not even give Kenny the courtesy of rising from his seat, which is customary for TDs when speaking to each other in Dáil Éireann.

END_OF_DOCUMENT_TOKEN_TO_BE_REPLACED

He stayed resolutely seated and ignored every element of Kenny's story - without a hint of sympathy for the suffering family at its heart. Without even looking at Kenny, he said: "Same reply." A two-word reminder that he had already told Mícheál Martin that no, he did not know when the programme would be commencing.

Kenny was correct in echoing Micheál Martin's earlier note that the government has made no visible progress on the issue of legislating for compassionate access to medicinal cannabis over the last two years. He was also correct in his assessment that Varadkar's reply was "terrible."

You really showed him, Leo! He'll think twice again before he, wait, let me check my notes, tries to raise the concern of a suffering child, wasting valuable time that could be spent on loosening regulations for hotel developers or something else that you actually care about.

Varadkar appears to revel in the idea of himself as a practitioner of dispassion, much like his heroine Margaret Thatcher. At least video footage of his response to Kenny would suggest so.

END_OF_DOCUMENT_TOKEN_TO_BE_REPLACED

In that sense, criticism of Leo Varadkar feels futile. There is no version of Ireland we have ever known where dismissiveness has not served as a guiding principle for our leaders.

The entire history of governance in Ireland has seen the public shunted between the centre-right and a right-wing theocracy. We are the home of the Magdalene laundries. The mass graves in Tuam. Bertie Ahern's advice that those complaining about our pre-recession bubble should commit suicide. Our governments have never troubled themselves with compassion and the complications it brings.

Eliciting compassion from Leo Varadkar is like trying to squeeze blood from a stone, or find value in a Fine Gael property market.

After all, what we're dealing with here is a gay man who once argued against same-sex marriage and the idea that gay people should be able to adopt. His dismissive attitude knows few bounds.

Leo's inability to show genuine concern for other people has been called into question on many other occasions.

In the past, he has compared women forced by Irish law to travel abroad for abortion to people who fly to Amsterdam in order to smoke weed. When asked in 2016 whether abortion was a class issue - because people with less money would find it harder to travel in order to obtain one - he laughed and said "I don't know what that means."

None of this stopped him taking credit for the legalisation of abortion when the Irish public voted to remove the constitutional ban through a referendum, which resulted from years of pressure by grassroots activists.

Confronted by the ever-surging homeless figures, Varadkar is similarly unmoved. Asked about homeless figures in late 2017, he very questionably claimed that Ireland's homelessness numbers are better than many of our peer countries, rather than managing to reach the very basic human conclusion that homelessness is intolerable. Because, as we can all see, Leo Varadkar can tolerate it just fine.

What else? His insistence that the announcement of a climate emergency was purely "symbolic." The aspersions he cast against consultants in Waterford who claimed dead bodies were being left on trolleys.

And yet, who would care about his demeanour if the homeless were housed and the sick were being treated? The problem, as Kenny and Martin both put to Leo, is that legislation on this issue was promised two-and-half-years ago. What has happened to it? What is the plan? What, in short, are Fine Gael actually doing for the Irish public?

When it comes to Leo Varadkar, it's always the same reply.

popular
Netflix has just added 23 very big movies to its library
Disney+ has just added 10 big movies to its library
People want "offensive" Crown Paints advert banned after attracting hundreds of complaints
Human remains found in suitcases are the bodies of two children
The 50 most iconic songs of all time* have been revealed
A terrific '90s crime drama is among the movies on TV tonight
The prequel to one of the best twists of all time and 7 more movies & shows to watch this weekend
You may also like
4 weeks ago
Varadkar says "the cake will get smaller for everyone" if Sinn Féin take over
1 month ago
Leo Varadkar has "never seen relations as bad" with UK ministers as they are now
1 month ago
Varadkar defends volatile exchanges with Pearse Doherty, says they were "self-defence"
1 month ago
Social welfare among support payments expected to increase later this year
1 month ago
"Role model" – Leo Varadkar hails Leinster's Nick McCarthy for coming out
2 months ago
National Children's Hospital set to cost even more than originally thought
Next Page