The taxi driver is being hailed as a hero as a result of his actions.

A taxi driver, who is now being hailed as a hero, reportedly locked a suspicious passenger in his car after spotting an explosive as the car pulled up outside Liverpool Women's Hospital on Sunday.

A taxi carrying a passenger pulled up to the hospital around 11am on Sunday (14 November), as a two minutes' silence was due to begin for Remembrance Sunday. The taxi then exploded.

The unknown passenger was declared dead at the scene. Counter-Terrorism police have confirmed three men have been arrested as a result.

It has since been reported that taxi driver David Perry allegedly leapt from his taxi after "noticing the passenger wearing a device".

This is Liverpool taxi driver David Perry who locked a Remembrance Sunday terrorist in his cab seconds before the bomber detonated an explosive device right outside a maternity hospital. David’s actions almost certainly saved many lives. He is an absolute hero. 👏👏👏👏 pic.twitter.com/qjHzGMxIUT

Though the explosion occurred at the hospital, the male passenger reportedly asked to be dropped off at Liverpool's Anglican Cathedral less than a mile away, where 1,200 military personnel, veterans and families of fallen soldiers had gathered for Remembrance Sunday.

A friend of Perry's told the Mail Online that the taxi was not able to get to the service as the "roads were blocked off".

The source continued: "David noticed the man had some kind of light attached to his clothing and was messing around with it, it didn't look right at all.

"I don't know how he's done it with a split second's thought but David's jumped out and locked the car with this guy in the back. As soon as he did, it's gone off. David's the luckiest man in Britain as well as the most heroic, if this guy got in the hospital God knows what could have happened." 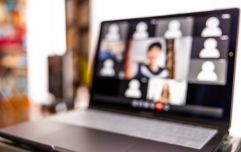 END_OF_DOCUMENT_TOKEN_TO_BE_REPLACED

Another friend said: "David suffered cuts and bruises, a perforated ear drum and needed stitches in his ear. He'll be sore in the morning but he's home. I'm just glad no new babies were leaving at the time. For David to have probably been terrified and think so fast and then end up OK – it's amazing."

While one person was confirmed dead at the scene, Perry was taken into hospital to be treated for severe yet not life-threatening injuries and, according to The Mail Online, he has since been released.

A fundraiser has been launched for Perry and his family and has already raised over £10,000 at the time of writing.

popular
Amazon Prime Video has quietly added 18 big releases to its library
Here's where all the 149 tickets that won €36,687 in Saturday's Lotto were sold
That Nic Cage film everyone is talking about is finally available to watch at home
Gardaí appeal for information on man in black tracksuit as part of Ashling Murphy murder investigation
Nightmare Alley review: Exactly the kind of adult-aimed movie people claim Hollywood doesn't make anymore
The JOE Movie Quiz: Week 137
Ashling Murphy vigil organiser speaks out following cyberflashing incident
You may also like
15 hours ago
Gardaí appealing for information after crash involving motorcyclist in his 70s
15 hours ago
Motorcyclist in his 20s dies after road crash in Limerick
1 day ago
Gardaí investigating "all the circumstances" surrounding Buncrana death
2 days ago
Tributes pour in after former RTÉ western editor Jim Fahy dies aged 75
2 days ago
Musicians pay moving tribute to Ashling Murphy on Late Late show
2 days ago
Body of man found in unexplained circumstances in Donegal
Next Page