"They no longer have a hold over me. Today, I’m free.”

Former Garda Majella Moynihan said that she attempted suicide on five occasions as a result of her treatment at the hands of An Garda Síochána during her service in the 1980s.

Moynihan was the subject of an RTÉ radio documentary that aired over the weekend, the response to which she has described as "phenomenal".

END_OF_DOCUMENT_TOKEN_TO_BE_REPLACED

When she became pregnant with her son David at the age of 22, Moynihan says that she was interrogated and had her job threatened by An Garda Síochána due to having pre-martial relations with another trainee garda.

As detailed in the documentary, Moynihan felt pressure to give David up for adoption.

In an emotional, in-depth interview on Today with Sean O'Rourke on RTÉ Radio 1 on Monday, Moynihan further elaborated on her story, noting that she had attempted suicide five times and was hospitalised in St. John of God Hospital in Dublin.

Moynihan was shunned by her colleagues, but she argues that it was the system that made them behave that way.

She notes that many of them have since apologised to her for not being there, and that she holds all of them in the height of esteem.

In conversation with Sean O'Rourke, Moynihan spoke of how her oppressors believed that they could break her, but ultimately could not. 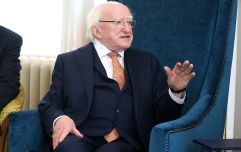 END_OF_DOCUMENT_TOKEN_TO_BE_REPLACED

"I’ve worked so hard over the years. They no longer have a hold over me. Today, I’m free.”

Moynihan also told of being victim to sexual harassment.

"I feel that they portrayed me as an easy woman," she explained.

"They felt that they could say and do anything they liked to me and they did."

Moynihan is set to meet with Minister for Justice Charlie Flanagan this week.

END_OF_DOCUMENT_TOKEN_TO_BE_REPLACED

She will also receive a personal apology from the Garda Commissioner regarding her treatment.

"I welcome that," she said, adding that while she would be happy to accept compensation, her story isn't about that.

popular
Donald Trump storms out of interview due to "tough questions"
Paul Pogba releases powerful statement in response to 'fake news' from The Sun
QUIZ: Name all the countries of the world that contain 7 letters
Barry Keoghan's Irish gangster movie Calm With Horses is about to be added to Netflix
REPORTS: A man has died after a shooting in Cork city on Tuesday
QUIZ: Name all the countries of the world that contain 6 letters
The JOE Movie Quiz: Week 75
You may also like
1 day ago
59 cases of Covid-19 linked to flight into Ireland
1 day ago
Fine Gael support at highest level in a decade according to latest poll
1 day ago
103 players won €10,209 each in Saturday night's Lotto draw
1 day ago
Cyclist killed following collision in Cork
1 day ago
Four more people with Covid-19 have died, 859 new cases
2 days ago
The clocks are going back this weekend, here's everything you need to know
Next Page