Man dies following collision with a lorry in Kildare

Gardaí are investigating a fatal road crash that occurred at 9.50am this morning (25 June).

A spokesperson for An Garda Síochána has confirmed that the collision between a car and a lorry took place in the Stephenstown area of Kilcullen, Naas, Kildare earlier today. 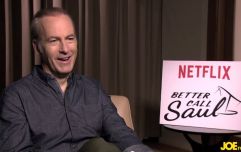 END_OF_DOCUMENT_TOKEN_TO_BE_REPLACED

A technical examination of the scene is being carried out currently and the road is expected to remain closed until late this evening.

Gardaí are now appealing for anyone with information, particularly any road users who may have dash-cam footage, to contact them at Naas Garda Station on 045 884 300 or the Garda Confidential Line on 1800 666 111.

popular
The 50 most iconic songs of all time* have been revealed
Met Éireann issues weather warning for three counties ahead of arrival of Storm Evert
Dublin cinema named best cinema in all of UK and Ireland
Gardaí investigating assault allegations after incident in Temple Bar
It’s official, Irish people have one of the best chances of surviving an apocalypse
Michael D Higgins raises concern over having to consider high volumes of legislation in short time frames
PICS: The man with the biggest penis in the world has one unbelievable problem with it
You may also like
1 day ago
Man in his 60s dies following fatal single-car crash in Kildare
1 day ago
Murder investigation launched after the death of a child in Belfast
3 days ago
Home and Away star Dieter Brummer found dead at 45
3 days ago
Man in his 60s killed following road crash in Meath
4 days ago
A cyclist in his 40s has died after a fatal single-car crash in Cork
6 days ago
Man in 60s dies at Dollymount Strand as number of swimming-related deaths this week rises to six
Next Page