The body of a dead man has been found at Disneyland Paris' Phantom Manor.

The haunted house attraction has been closed to the public whilst French authorities investigate the death. There are no plans to open the ride imminently. 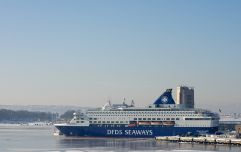 END_OF_DOCUMENT_TOKEN_TO_BE_REPLACED

The deceased, who was discovered by park officials, has been identified as a 45-year-old Disney employee. He was a father from Noisy-le-Grand, and had worked at the park since 2002.

Patrick Maldidier, a Disneyland union representative, told Le Parisien that the man "always had a smile on his face."

His name has not been disclosed at this stage.

The circumstances around the death remain unclear, although reports suggest he suffered a fatal electric shock.

popular
Record Christmas bonuses worth €390 million to be paid to 1.6 million recipients next week
Larry Gogan's grandchildren pay lovely tribute to him on the radio
QUIZ: Can you guess these European countries from their outlines?
The JOE Movie Quiz: Week 80
Here’s how you can get 20 bets for €2* for the next EuroMillions jackpot
Liam Neeson to narrate landmark two-part series marking the 175th anniversary of the Great Famine
The JOE Movie Quiz: Week 79
You may also like
1 month ago
Paul Pogba releases powerful statement in response to 'fake news' from The Sun
11 months ago
Several Aer Lingus and Ryanair flights cancelled due to strike action in France
1 year ago
Long-lost painting worth €6million found hanging in elderly woman's kitchen
1 year ago
Michael Jackson's Leaving Neverland accusers are being sued by MJ fan clubs
1 year ago
Dozens of schools closed in France as European heatwave intensifies
1 year ago
A wine theme park has opened in France and it just made our bucket list
Next Page