A family in Mayo have collected their massive winnings this week, after becoming Ireland's largest Lotto winners in history.

The controversial jackpot which rolled over for months was capped at €19,060,800.

END_OF_DOCUMENT_TOKEN_TO_BE_REPLACED

The family, who wish to keep their win private, bought a Quick Pick ticket from Laura's XL store in Castlebar.

Over the course of the Lotto jackpot rollover, €87 million in prizes were won, with more than €60 million raised local Good Causes in communities across Ireland.

“That Saturday night back in January is still a blur and even though we’re finally collecting a cheque for over €19 million, we’re still waiting for somebody to tell us that we made a mistake and we’re not the winners at all!" said a spokesperson for the family.

"There was a lot of excitement about the draw that night, so we watched it on the television at home. I had the ticket in my hand and to see the six numbers come out one after another was like an out of body experience – it’s impossible to explain.

END_OF_DOCUMENT_TOKEN_TO_BE_REPLACED

"We didn’t get carried away one bit because we thought that there was no way we could have won it. We got the phones out and frantically started scanning it on the National Lottery App.

"After about 20 minutes, the ticket scanned, and a message popped up that will live with us all for the rest of our lives. It said, ‘You’ve won big!’

"It was such an incredible moment.”

The family described how it felt seeing Mayo being "gripped with Lotto fever" as the winner had yet to be announced. 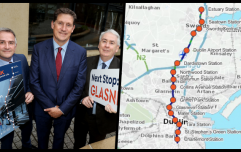 END_OF_DOCUMENT_TOKEN_TO_BE_REPLACED

"One night we were watching the news on TV when somebody in Mayo was interviewed, and they mentioned that they better check their tickets to see if they were the lucky winner.

"One of the family shouted at the TV, ‘Don’t bother checking because we’ve got the winning ticket right here’. We all absolutely burst out laughing knowing that all this fuss was being made and we had the winning ticket all along.”

The family are hoping to use the money to help their wider family, close friends and community in any way they can, once they've paid off mortgages and loans.

"It really is such an exciting time in our lives and we can’t wait to get started to changing people's lives,” a spokesperson added.

popular
An incredible Western crime drama is among the movies on TV tonight
The JOE Friday Pub Quiz: Week 314
An Oscar-winning war thriller is among the movies on TV tonight
“Megaproject” MetroLink takes next step towards construction
Johnny Depp/Amber Heard trial movie unveils first trailer and it's not good
QUIZ: Step on up and conquer this tricky General Knowledge Quiz
QUIZ: Name the country for each of these non-capital cities
You may also like
1 day ago
Man arrested following endangerment incident at Sinn Féin TD's home
1 day ago
Five-year-old boy dies following collision with van in Derry
1 day ago
Gardaí investigating after car driven through gates of Sinn Féin TD's home
1 day ago
Weather warnings in effect as wind and rain hits across Ireland
1 day ago
Gardaí call on people to download the new Garda app
1 day ago
Fianna Fáil councillor issues apology over comments about Travellers
Next Page