Michael D. Higgins has defended his comments on Fidel Castro

President Michael D. Higgins has come in for criticism following his statement on the death of former Cuban President Fidel Castro.

In the statement, Higgins had referred to Castro as "a giant among global leaders whose view was not only one of freedom for his people but for all of the oppressed and excluded peoples on the planet."

The statement did not focus on Castro's human rights abuses, though it did include the caveat "The economic and social reforms introduced were at the price of a restriction of civil society, which brought its critics. " 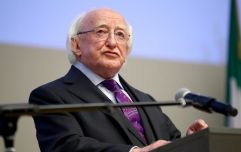 END_OF_DOCUMENT_TOKEN_TO_BE_REPLACED

Higgins was criticised for his statement by other Irish politicians, including Senator Ronan Mullen and TD Noel Rock.

According to the Independent, a spokesperson for Higgins has argued that the statement did make a clear reference to human rights abuses in Cuba:

"The President’s statement clearly referred to the price paid for social and economic development in terms of civil society and the criticisms it brought. This obviously and unambiguously included the human rights organisations and activists who have always had the support of the President. Any suggestion that the President neglected human rights concerns is both unsustainable and unwarranted."

Minister for Foreign Affairs Charlie Flanagan also defended Higgins' statement, saying that the President is "quite entitled to make his views known on the passing of Castro."

popular
Netflix has just added 23 very big movies to its library
The JOE Friday Pub Quiz: Week 308
Controversial influencer Andrew Tate banned from Instagram and Facebook
Pilots fly over destination airport at 37,000 feet because they were both sleeping
Fine Gael announces special screenings of Michael Collins movie in 19 cinemas across Ireland
One of 2022’s best hidden-gem comedy series is available to stream
Passenger plane dropped 1,200 feet in a minute without pilots noticing
You may also like
1 month ago
QUIZ: Can you name all the Presidents of the Republic of Ireland?
2 months ago
"It is a disaster" - Michael D. Higgins slams Ireland's housing policy as "great failure"
2 months ago
Local bishop criticises Michael D. Higgins' statement following Nigerian church shooting
3 months ago
"Incredible and dangerous narcissism" – Michael D. Higgins slams Elon Musk's purchase of Twitter
4 months ago
Michael D Higgins expresses his support and condolences following "appalling recent events" in Ireland
4 months ago
EXCLUSIVE: John C. Reilly - "It felt like all of Ireland was hugging me"
Next Page