What minimum alcohol pricing will mean for buying drink in pubs, restaurants, off-licenses and shops

A leaked memo due to be brought before Cabinet has shown the Government's intentions to introduce a set minimum price of 10 cent per gram of alcohol.

The legislation would be introduced under Section 11 of the Public Health Alcohol Act and would see an increase in the cost of "cheap alcohol", including beer, wine, and spirits.

END_OF_DOCUMENT_TOKEN_TO_BE_REPLACED

What is minimum alcohol pricing (MUP)?

Minimum unit pricing (MUP) is a “floor price” for which alcohol cannot legally be sold and is based on the amount of alcohol in a product, measured in grammes.

What will it mean for buying alcohol in Dunnes, Tesco, and other shops and off-licenses?

What will it mean for buying alcohol in restaurants, bars, and clubs?

END_OF_DOCUMENT_TOKEN_TO_BE_REPLACED

According to Alcohol Ireland, the MUP will not affect the price of any alcohol sold in pubs, clubs, and restaurants in Ireland whenever they do reopen.

This is due to "alcohol in the on-trade already being sold well above the threshold for any proposed MUP."

What is the reason for the MUP?

MUP is a targeted measure, designed to stop strong alcohol from being sold at very low prices in the off-trade, particularly supermarkets, where alcohol is frequently used as a “loss leader” and sold at low prices.

Will it impact the North of Ireland? 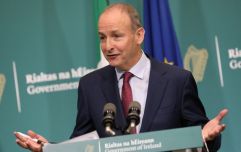 END_OF_DOCUMENT_TOKEN_TO_BE_REPLACED

The Northern Ireland Health Minister Robin Swann told the Sunday Independent that said that similar legislation will not be enacted in the North before May 2022.

However, the memo revealed that the Irish Government is looking at its timeline for the introduction of the legislation to reduce the "health harms of alcohol" by preventing the sale of alcoholic beverages at low prices.

The Big Reviewski || JOE · The Big Reviewski with Dune, a mini-Hangover reunion & the best of Timothée Chalamet
popular
Report: Crew left Alec Baldwin film set in protest before fatal shooting
PICS: The man with the biggest penis in the world has one unbelievable problem with it
The 50 most iconic songs of all time* have been revealed
9 of the best horror movies on Netflix right now
The JOE Friday Pub Quiz: Week 266
Alec Baldwin was told prop gun was safe before fatal shooting
Here's the line-up for tonight's episode of The Graham Norton Show
You may also like
15 hours ago
New appeal over Philip Cairns case on 35th anniversary of his disappearance
16 hours ago
WATCH: Massive queues in Dublin as nightclubs finally reopen
1 day ago
Hunger strike ends as Nadim Hussain assured he won't be deported
1 day ago
Vintners hit out at "hapless" guidelines following "shambolic" week
1 day ago
9.2 million illegal cigarettes seized at Dublin Port by detector dog
1 day ago
Nightclubs are now ticket-only events, according to new measures
Next Page