Firefighters are tackling a blaze at the famous Paris cathedral.

Paris' iconic cathedral Notre Dame is on fire. The cause is not currently known, however officials have said it could be linked to renovation works.

The fire has been raging for a number of hours and caused the cathedral's world-famous spire to collapse.

The Gothic building, 850 years old, is in urgent need of repair and the Catholic Church launched an appeal for funds last year. A €6 million renovation on the spire was underway.

Officials have established a cordon around the cathedral. Mayor of Paris Anne Hidalgo said the fire was "terrible." 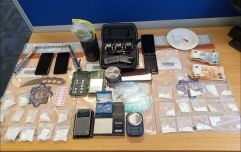 Weapons and drugs seized from a house in Tipperary

END_OF_DOCUMENT_TOKEN_TO_BE_REPLACED

The fire started on Monday afternoon and emergency responders have launched a major operation to combat it.

French newspaper Le Monde reports the fire started in the attic of the famous church, before spreading across its roof.

Notre Dame is one of the most-visited buildings in the world and annually 12 million people visit it.

The fire was first reported at 5.50pm British Summer Time.


popular
Ireland wins appeal in €13 billion Apple tax ruling in EU Court
QUIZ: How well do you remember High School Musical?
QUIZ: Can you name all the countries beginning with 'E'?
Dara Calleary named as Minister for Agriculture following Barry Cowen sacking
Lidl launches instant rewards app for customers
Grant Imahara, co-host of Mythbusters, has died aged 49
Barry Cowen releases statement following sacking
You may also like
22 hours ago
Man in his 60s suffers serious injuries following collision between lorry, tractor and car in Roscommon
1 day ago
Grant Imahara, co-host of Mythbusters, has died aged 49
1 day ago
Body found in the search for actress Naya Rivera
1 day ago
Gardaí issue warning over 'money mules' after suspected laundering of large quantity of cash in Cork
2 days ago
FAI and Kick It Out condemn racial abuse aimed at David McGoldrick
2 days ago
Four arrested following house fire in Dundalk
Next Page