Nancy Pelosi praises Taoiseach for "reinvigoration" of housing and health

"The world has been awed by his handling of the pandemic."

Speaker of the US House of Representatives Nancy Pelosi has highlighted Taoiseach Micheál Martin's tackling of the ongoing housing and healthcare issues in Ireland.

Speaking at the Friends of Ireland luncheon in Washington D.C. on St Patrick's Day, Pelosi paid tribute to the Taoiseach's "reinvigoration" of Ireland's approach to the housing and health crises as well as his overall managing of the economy.

END_OF_DOCUMENT_TOKEN_TO_BE_REPLACED

"I said [to] the Taoiseach that the world has been awed by his handling of the pandemic," Pelosi began.

"Because he'd had a lifetime of leadership in terms of public health, of his handling of the economy of Ireland; especially during the difficult times of Brexit, his reinvigoration of the government focus on housing and healthcare – healthcare being a focus in his public life.

"And his unyielding belief in the power of education for the Irish children. And we saluted him for Ireland's very important role in promoting peace in Ukraine."

The Taoiseach was absent during this address, having contracted Covid-19 on Wednesday evening.

END_OF_DOCUMENT_TOKEN_TO_BE_REPLACED

As a result, his scheduled face-to-face meeting with US President Joe Biden at the White House was re-arranged on a more digital front.

During his virtual meeting with the Taoiseach on Thursday afternoon, Biden praised Ireland's stance on welcoming Ukrainian refugees to the country.

"What Ireland is doing now taking in Ukrainian refugees speaks so loudly about your principles," said Biden.

"It's amazing and I want to publicly compliment you for it. Thank you."

"All's changed, changed utterly. A terrible beauty has been born." 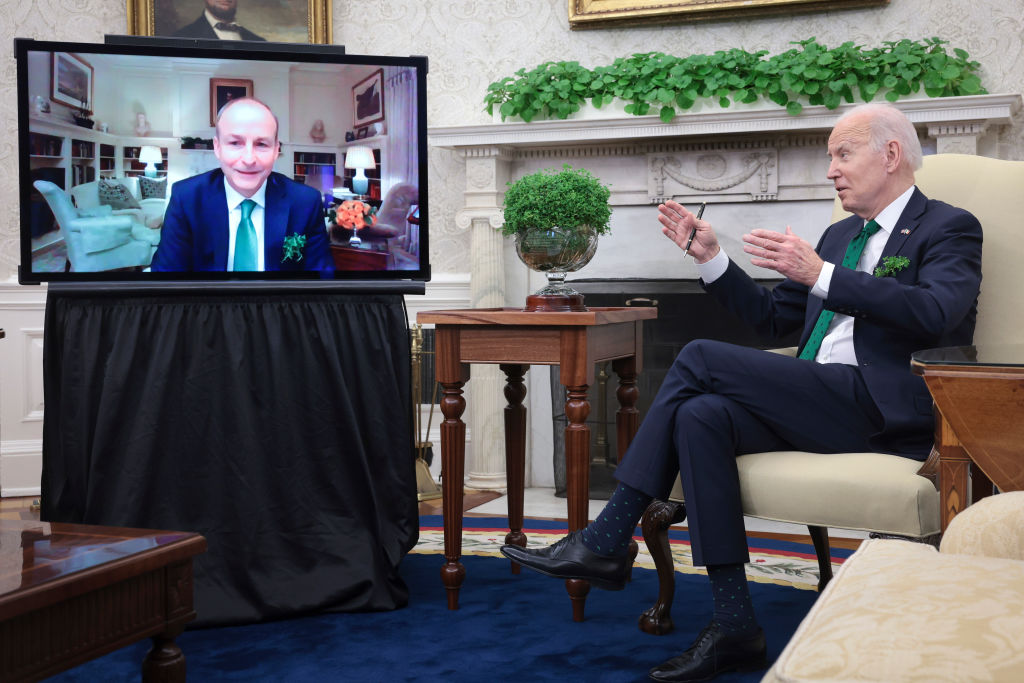 The Taoiseach once again affirmed Ireland's endorsement of the strictest possible sanctions on Russia as the world seeks to end the "immoral and unjustifiable war".

Biden opened the meeting by apologising for the Taoiseach's "inconvenience", noting that the pair only spent seven-and-a-half minutes in one another's company on Wednesday.

"Your leadership on the global stage has been notable and impressive," Biden told Martin.

"You are now a member, temporarily as you are, of the [UN] Security Council, your leadership on the global stage within the EU as well, and your condemnation of Putin's aggression and your support of the sanctions.

"But as usual you're basing it on principle and the moral standing of a country."

"Too much blood, sweat and tears have been shed to get that done and this is no time to change it," he said.

In response, the Taoiseach noted that last year the two met virtually across the Atlantic.

"This year we're meeting virtually across the road – so we're getting closer," he joked while noting that he's feeling in good health, pointing to the effectiveness of the Covid-19 vaccine.

"I share with you our horror at the barbaric attack on the civilians of Ukraine," the Taoiseach stated.

"I want to take this opportunity to genuinely salute your leadership – it's firm, it's determined, it's strong, it's measured in the teeth of this crisis, particularly your capacity to marshal like-minded democracies.

"They are coming together to respond in an unprecedented way to this barbaric attack on the women and children of Ukraine."

The meeting concluded with the extension of an invitation for Biden to come to Ireland in the near future.