Eamon Ryan wants to hear from YOU about the future of cycling in Ireland.

3,500 kilometres of open, cycle-focused road is the bold vision from Transport Infrastructure Ireland (TII) in new plans to develop a National Cycle Network (NCN) for the country.

Officially launching its intentions to the public on Wednesday (4 May), TII intends for the core cycle network to roll out "in the coming years", connecting key destinations across Ireland with "safe and attractive routes" for all to avail of.

END_OF_DOCUMENT_TOKEN_TO_BE_REPLACED

If approved, the overall network will consist of over 200 villages, towns and cities. The goal is to make it easier and safer for more people to cycle, for the purposes of commuting, leisure, tourism and reducing reliance on motor vehicles.

In 2021, Minister for Transport Eamon Ryan tasked TII with leading the development of the network. In the interim, TII has worked with a range of partners, including the Department of Transport, to construct a draft for the attention of the general public.

The final stage of the plan will see the public get involved, providing feedback and ideas for Government approval. This part of the process will be put into action in the third quarter of 2022, in line with the Climate Action Plan. 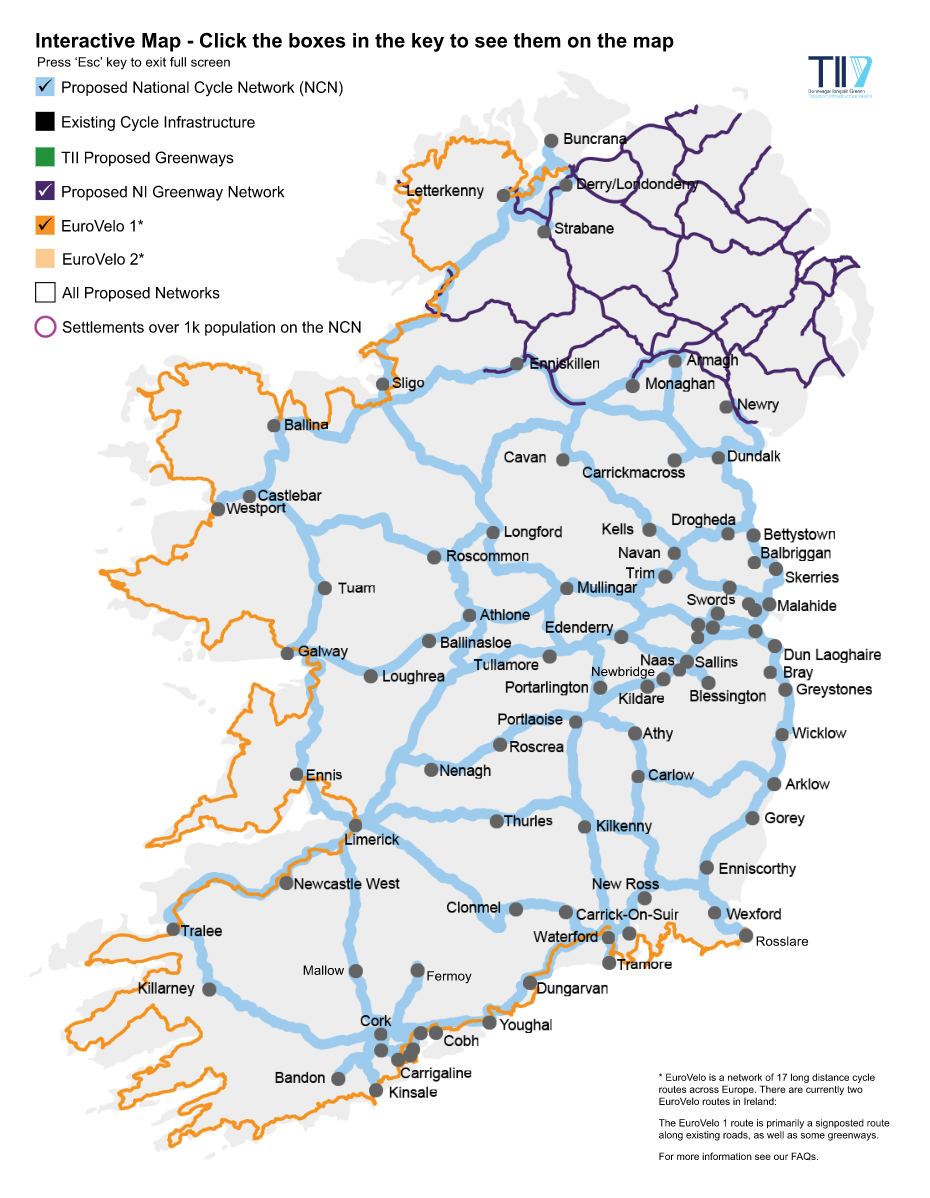 END_OF_DOCUMENT_TOKEN_TO_BE_REPLACED

The National Cycle Network map – an interactive mock-up version of which may be viewed here – incorporates many existing and planned greenways, in addition to a range of proposed new cycle routes. The network will also "complement and integrate" local cycling development projects.

"The expansion of our cycling network is key to enabling everyone, young and old, urban and rural, to enjoy and make the switch to cycling," said Eamon Ryan.

"Whilst we will continue to invest in Greenways like the Galway to Dublin route currently under development, this is not only about providing cycleways for long distance cyclists. This proposed network’s focus is on everyday travel and use - connecting village to village, town to village, city to town.

"It’s another step in connecting our communities, to enable and encourage as many of us as possible to choose the bike when travelling," Minister Ryan continued.

"The network will connect into other sustainable transport modes, enabling further onward travel using the bus, train and by walking."

popular
Gardaí unveil new Armed Support Unit vehicles to replace older models
Netflix has just added 33 very big movies to its library
One of the greatest crime movies of all time could be getting a sequel
The 50 most iconic songs of all time* have been revealed
The full list of cancelled flights in and out of Dublin Airport on Monday (so far)
QUIZ: It's time for one of our trickiest General Knowledge Quizzes yet
Increase in passenger charges at Dublin Airport may be on the way
You may also like
12 hours ago
Increase in passenger charges at Dublin Airport may be on the way
15 hours ago
The long-awaited MetroLink is finally happening, for real this time, honest
16 hours ago
Waterford man sentenced to three months imprisonment for operating "cruel and illegal" puppy farm
18 hours ago
Dublin Airport denies making 1,000 people redundant during the pandemic
1 day ago
"Significant improvements in passenger experience" at Dublin Airport in June
1 day ago
Man seriously assaulted during "aggravated" home invasion in Carlow
Next Page